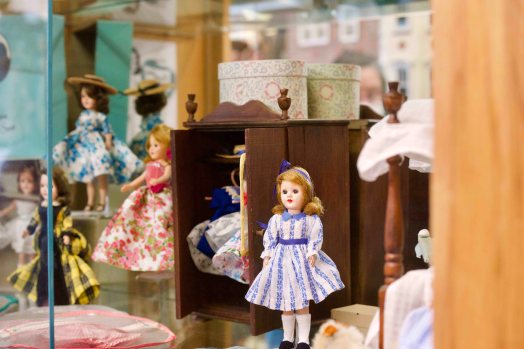 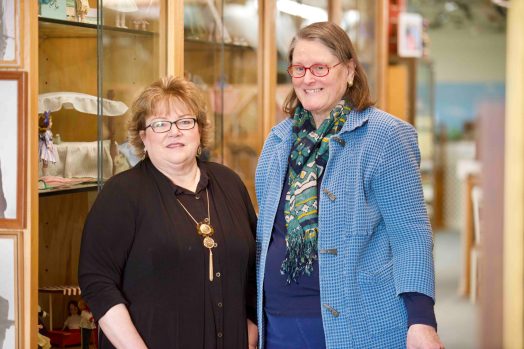 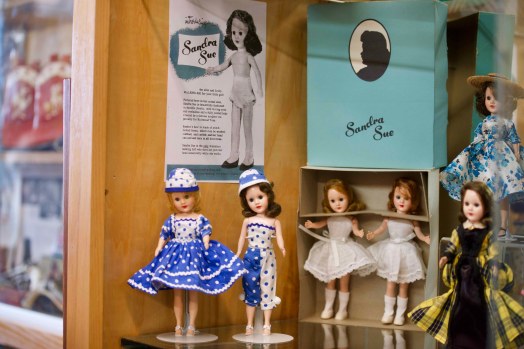 Carl Blankenship/Salisbury Post - Sandra Sue was created by Ida Wood with the goal of supporting her family. 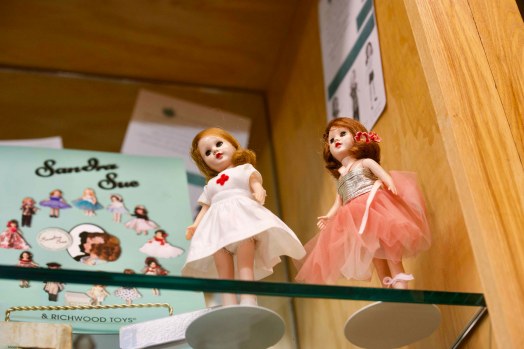 Carl Blankenship/Salisbury Post - Some of Sandra Sue's outfits reflected common careers for women at the time.

SPENCER — Margaret Kincaid’s love for a toy from her youth has landed in Spencer.

The New Hampshire-based antique doll dealer has donated a permanent display filled with Sandra Sue dolls and accessories to the N.C. Museum of Dolls and Toys.

The midcentury dolls are considered modern and not exactly of the same nature as some of the antique French dolls she sells, but they have a special significance to Kincaid. She had one when she was a girl and she admires the quality of the pieces as well as the story of a family supported by the dolls.

The dolls were produced between 1947 and 1958 by Richwood Toys in Annapolis, Maryland. They were a project of Ida Wood.

Wood’s family fell on hard times in the Great Depression. Kincaid said Wood set out to start a business building quality dolls to support her family.

“There weren’t that many choices,” Kincaid said. “The U.S. hadn’t really geared up to a consumer economy and she actually did very well.”

It started as a home business. Wood started out making all the costumes on her dining room table. She quickly ran out of space and took on six employees.

In the early 1950s, Wood began producing dolls with modified legs: they were given high heels to give the impression of an older girl. Kincaid said Sandra Sue was probably the first doll marketed as a teenager.

“She thought if she just had the heels done, her same body and face would turn into a teenage doll,” Kincaid said.

Kincaid pointed to a few interesting points about the dolls: heel styles that distinguish age, fully articulated arms and legs except on “walker” pieces, high-quality plastic, hair and a compact size.

Kincaid said Sandra Sue shows an idealized view of childhood in the 1950s through her clothes and accessories like a large canopy bed frame, wardrobe and porcelain set. Outfits portrayed the narrow slice of the professional world open to women during the period, including one for a nurse.

The display includes 29 dolls, with 27 being Sandra Sues and two variants called Cindy Lou and Tina Sue, portraying older and younger girls, a number of accessories, outfits, a playset and some production tools from the factory. The case is worth about $6,000.

Kincaid and fellow collector Peggy Millhouse literally wrote the book on Sandra Sue. The exhibit was composed by Kincaid and Museum Board Chair Robin Wyatt.

Kincaid and Wyatt spent January getting the exhibit ready.

Kincaid said when manufacturing the dolls, Wood thought hard about keeping all the Sandra Sue products neat, even including special bags for clothes. In the book, Kincaid and Millhouse included the die patterns for Sandra Sue’s clothes so anyone who gets their hands on one of the dolls could make their own clothes for fun.

“We have actually noticed, on eBay, there is quite a bit of interest in Sandra Sue,” Kincaid said.

Wyatt agreed and noted original clothes are often worth more than the dolls themselves.

Kincaid still has a collection of her own after the donation. Her collection started when she received her original, and she picked up a few dolls later on, but in about 2011 she got more interested in pursuing a large collection.

She said some people in the collector community at the time were skeptical, but the dolls were moving toward antique status and she believed a lot of collectors would be interested in the dolls.