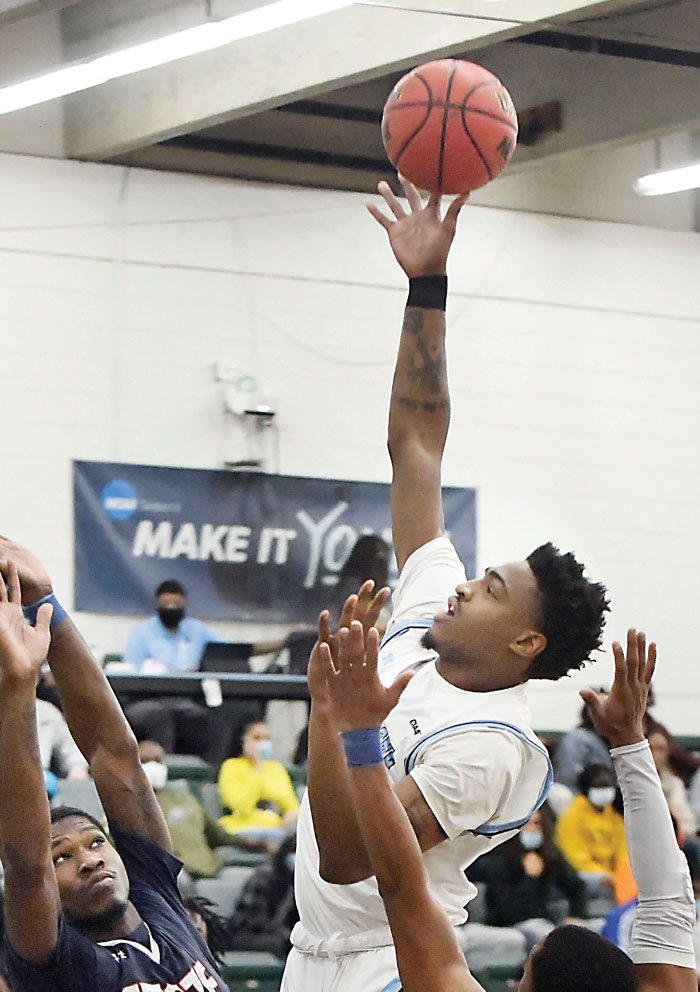 In a loss that may leave a stain, the Blue Bears squandered a seven-point, second-half lead and fell to struggling Claflin, 96-82, before a modest crowd at New Trent Gym. It snapped a six-game winning streak and left LC with a 4-2 mark against CIAA Southern Division foes.

“I think we got in our own way,” losing coach James Stinson said, moments after Livingstone (10-6, 7-3 CIAA) suffered its first setback since Jan. 8. “We fouled too much. We turned the ball over too many times. And they did a good job executing in the half court and took care of the basketball. That’s what they were able to do.”

Livingstone shot 53.7 percent from the field — good enough to win most nights — and outrebounded the Panthers 39-29. But Claflin (5-16, 4-8) grabbed a 55-54 lead on an Isaiah Jennings layup with 12:18 remaining, then gradually extended its advantage and won for only the second time in its last eight games.

“First of all, I knew they were going to come after us,” said Dr. Ricky Jackson, Claflin’s ninth-year coach. “But we had a lot of good ball movement, so that helped us. On the defensive end, we were able to sit back in that zone and stay aggressive. We forced turnovers and made them make shots.”

Livingstone was paced by 6-foot-6 freshman Khyree Temple, a forward who came off the bench and shot 10-for-13 from the field and netted a team-high 22 points in just 21 minutes of playing time. He also snatched five offensive rebounds and blocked a shot.

“He still has a lot to learn,” said Stinson. “But he makes those special plays and his effort is always there. Overall, he had a tremendous night.”

Temple — a West Philadelphia product — scored three times on jackhammer jams, including back-to-back stuffs in the first half. LC led by as much as 34-27 on a pair of Arion Broadnax free throws before trotting to its locker room with a 43-39 halftime edge. Teammate De’Marr McRae’s 3-pointer early in the second half and Cam Carpenter’s quick-burst drive for a layup sparked a second-half run that put the Blue Bears up 50-43 with 15:06 remaining.

“We tried to slow them down,” Jackson said. “But Livingstone has such good athletes, guys with a lot of lift. They don’t want to go slow.”

The game turned when Claflin used a 15-4 scoring blitz to go up 62-56 midway through the second half. Most damaging was the work of senior Donnell Frayer, Jr., a 6-2 guard who scored nine of his team-best 22 points in the final nine minutes. His 3-ball from the right corner gave the Panthers a 69-60 lead and another long ball — this one under pressure from the right wing — made it 76-64 with 7:17 to play.

“It finally feels like we’re playing February basketball,” Frayer said after shooting 7-for-13 from the floor — and draining half of his 10 three-point attempts. “Everything is coming together at the right time.”

The Blue Bears know that feeling. They had handed Southern Division frontrunner Fayetteville State its only conference loss in mid-January and outscored Northern Division contender Lincoln just last Wednesday night. When it met Claflin Jan. 15 in Orangeburg, SC it used a late-game hustle play to prevail, 70-67.

“I think it’s tough for everybody else because they look at (Claflin’s) record,” Stinson said. “But I understood coming in what kind of team they would be. We didn’t take anything for granted.”

“We’re scrambling a little bit,” Stinson acknowledged. “We’re still trying to find our way, trying to find that chemistry that seems to be missing. We just have to gather ourselves and prepare for Fayetteville State.”

NOTES: The Blue Bears entered the game averaging 75.7 points-per-game, tops in the CIAA. They made 29 of 54 field goal attempts, including 15 of 26 in the second half. … LC’s Navar Elmore contributed 10 points, six rebounds and his 40th blocked shot of the season before fouling out in the game’s final minute. Teammate Deshone Hicks had five assists. … Claflin shot 52.4 percent from the floor and forced 24 Livingstone turnovers.