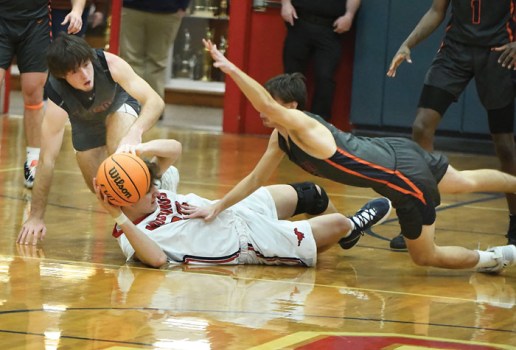 East's Garrett Lee goes to the floor as Carson's Mickey Beas dives in. photo by Wayne Hinshaw, for the Salisbury Post 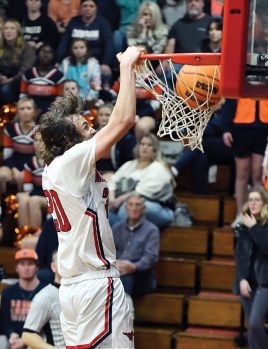 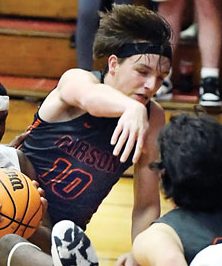 Colin Ball (10) had a career-best 19 to lead Carson on Wednesday. File photo by Wayne Hinshaw, for the Salisbury Post 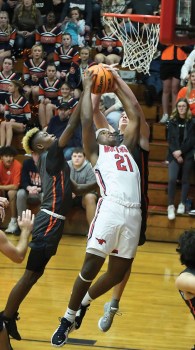 GRANITE QUARRY — Fueled by a big Senior Night crowd, East Rowan’s boys basketball team got off to a tremendous start and used it to beat Carson 69-64.

“We took control of the game early and didn’t look back,” East head coach Andrew Porter said. “Our halfcourt press was effective and gave Carson a lot of trouble.”

It was a sweet revenge victory for the Mustangs, who were nipped 52-50 in a South Piedmont Conference game at Carson on Jan. 19.

“We played aggressive on offense and defense tonight, played with a lot of energy and intensity,” Porter said.

Carson (3-16, 2-8) scored 45 points in the second half — almost what the Cougars average per game — but couldn’t overcome that 20-point halftime deficit.

Dylan Valley led East with 22 points. Carson held him to 11 in the first meeting. Valley has scored in double figures in 10 straight games, but this was the first time he’s topped 20 since Dec. 8.

Tee Harris scored 15 and has been in double figures in 14 straight games for the Mustangs. He had 13 boards.

Emory Taylor scored 21 points, a season high and matching his career high, to lead the Cougars.

It’s a huge victory for East, as the SPC plans to hold a six-team tournament, hosted by Concord. This was a battle that could determine sixth.