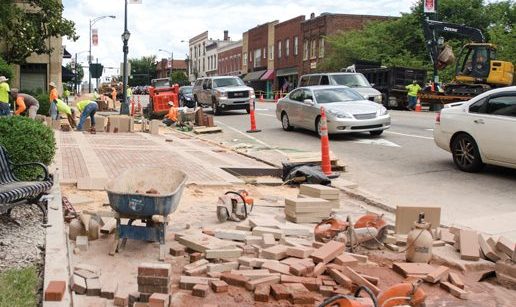 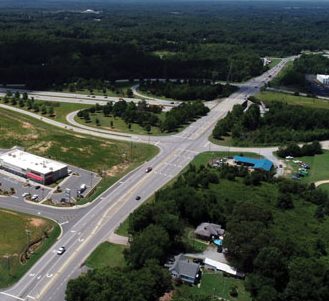 A $14 million widening of Julian Road is scheduled to begin this month. This image of Julian Road was captured using the Rowan County Rescue Squad drone. File photo by John Weddington

SALISBURY — Federal, state and local money will fund about 17 city transportation projects, with about a half-dozen slated for construction this year or the 2022-23 fiscal year.

The city’s total match for projects expected during the current fiscal year and the 2022-23 fiscal year, which begins July 1 and ends June 30, is roughly $843,000. Approximately $15.87 million in federal and state grant funding, along with funds from the city’s sidewalk pay in lieu of program, will make up the difference.

The city is a member of the Cabarrus-Rowan Metropolitan Planning Organization, which plans for regional transportation needs including highway, transit, air, bicycle and pedestrian facilities. City Engineer Wendy Brindle said the city’s participation in the MPO is the primary reason it’s been able to secure a majority of its transportation funding for projects.

Those of the highest priority include ones listed on the city’s Transportation Improvement Program, which is determined by the North Carolina Department of Transportation’s Strategic Prioritization Office. Brindle said projects submitted to the state’s Transportation Improvement Program every two years undergo a scoring process. The city’s TIP is a 10-year plan, and Brindle said the state’s TIP renewal process has been halted until the summer of 2024. That means new projects can be submitted then, but they likely won’t receive funding until 2026.

The only project currently slated for construction this year is the widening of Julian Road from Jake Alexander Boulevard to Summit Park Drive, which will begin this month. State and federal funding for the project is $14 million, with the city providing a match of $91,287. The city will also be adding sidewalks during the construction phase, and utility relocation is in progress.

Brindle said a railroad closure on Henderson Grove Church Road project will use $2.95 million in federal funding, with no match required from the city. Construction for the project is to be determined, but it will be coordinated with the Julian Road widening project.

In April, NCDOT is expected to begin installing turn lanes on Heilig Road at Faith Road, with no funds required from the city. Because of safety funds from the NCDOT’s Strategic Prioritization Office, the installation of a U-turn on Jake Alexander Boulevard near Morlan Park Road will come at no cost to the city. Construction time for that project has not yet been determined. Brindle said drivers have used the leftover median in that area to make U-turns, and the project will force them into the proper lanes and avoid frequent rear-end collisions.

A number of other projects will receive various sources of funding, including Congestion Mitigation and Air Quality Improvement grants, Transportation Alternatives Program grants and Surface Transportation Block Grant Program Directly Attributable grants. During the 2022-23 fiscal year, construction will begin on the installation of sidewalks on Old Concord Road from Ryan Street to Jake Alexander Boulevard, with the help of $331,000 in CMAQ funding and a $82,800 local match. Brindle said acquiring the right-of-way for that project is underway.

Another project in 2022-23 is the Brenner Avenue sidewalk from Statesville Boulevard to Horah Street, which will also install turn lanes at Brenner and South Link Avenue. That project will use $608,000 in CMAQ funding, along with a local match of $152,000. Right-of-way acquisition is also in progress for this project.

The city is handling four projects in-house, including the installation of stamped crosswalks along Innes and Long streets, which Brindle said will help the visibility of pedestrians. That project costs $300,000, in-house design has been completed and bid documents are being prepared. Construction is slated for March.

Brindle said signal timing upgrades are needed on major corridors, including Jake Alexander Boulevard, Innes and Main streets, and they are slated for March. The city’s required match has not yet been determined, but Brindle said the city had been waiting for the NCDOT’s visit for downtown re-striping and will begin the project in March.

The Public Works Department planned to handle the installation of sidewalks on Ryan Street from Celebration Drive to Old Concord Road, but Brindle said staffing challenges have required the department to bid the project. The city will provide $110,000, with $46,000 received from the sidewalk pay in lieu of program, which allows developers to pay the city to install sidewalks rather than constructing them. That project is scheduled to begin in March.

Similarly, the city plans to install a sidewalk at Lash Drive in April using $64,000 in supplemental funding, with a city match of $21,000, which includes $11,000 from the sidewalk pay in lieu of program. The in-house design of that project is about 90% complete, Brindle said.

Brindle said a multi-modal center at Salisbury Depot is a potential project, along with the extension of Bendix Drive to Old Concord Road. She added that the city continues to look for grants to fund more greenway and sidewalk projects and works alongside NCDOT for various needed safety projects.

During the City Council’s annual planning retreat last week, Brindle said staff in the spring plan to present a draft of the new traffic calming policy.