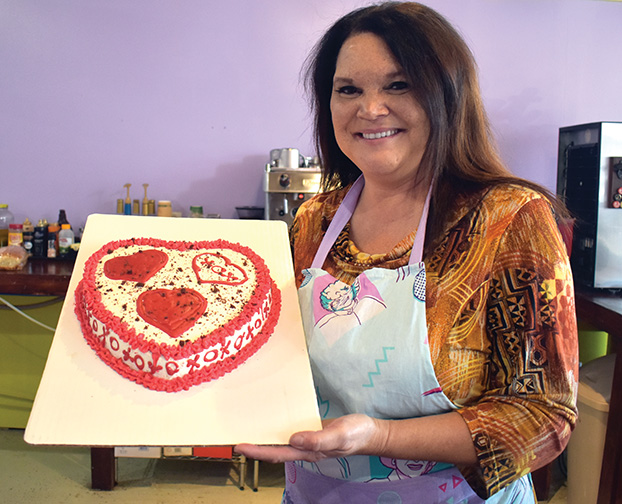 Tessa Pittman has been baking since she was 7 years old, but now has her first commercial bakery. Called Southern SweeTees, the bakery is located in the kitchen and storefront that was previously home to Fulton Street Bakery. Ben Stansell/Salisbury Post

More than just a toy, the miniature appliance could be used to make actual baked goods, which is exactly what Pittman did. Her first creation was a batch of biscuits that were, as she puts it, “hard as a rock.” With the help of a neighbor who also happened to be a retired Army chef, Pittman steadily began to improve her baking.

“I would take my stuff to him and he would tell me, ‘No, you need to add one of these three ingredients,’” Pittman said.

“Once I got to the place where it was edible and really good tasting, to see people’s expressions when they were eating it gave me joy,” Pittman said.

Pittman still loves spreading happiness through food. That’s what she hopes to do at Southern SweeTees bakery, which she opened at 1024 S. Fulton St. in November.

Pittman inherited the storefront and kitchen from Carol Bellis, the baker behind Fulton Street Bakery. Pittman will continue to make some of the familiar breads and goods loved by many, but will be bringing her own flavors to the bakery, including her award-winning red velvet cupcakes.

Long before Pittman was winning over judges with her cooking, she was learning the ropes in her grandmother’s busy kitchen. With 13 children and dozens of grandchildren, Pittman’s grandmother was constantly standing over a stove. Pittman was usually by her side.

“I was always in the kitchen with her because we were always cooking,” Pittman said.

After graduating from her Holly Hobbie oven, Pittman started cooking more sophisticated and challenging dishes. When she was about 10 years old, Pittman was charged with preparing a meal for her own Thanksgiving table. She charged diners, mostly cousins, 5 cents to enjoy the baked hens, stuffing and mashed potatoes she made. Business was lucrative.

“My table was always full,” Pittman said. “And they always had happy plates.”

Pittman used the profits to buy new baking supplies and spices to further her culinary development.

Even though Pittman — who also works in ministry — didn’t pursue a career path in the kitchen, she continued to use cooking as a way to decompress from the stresses of life.

“It has always been my out,” Pittman said. “It gives me time to think and create new things.”

When Pittman’s husband comes home to the aromas of baking bread, he usually has one question: what’s wrong? If Pittman has an especially bad day, her neighbors will likely be inundated with delicious pastries or cakes.

The idea of starting a commercial bakery has always been in the back of Pittman’s mind. But it wasn’t until Pittman happened to meet Bellis at a store in Lexington that she saw the opportunity to make that vision a reality. Bellis was planning to retire and sell the shop and Pittman decided to make her long-held dream a reality.

“The transition was so smooth and it was the right time,” Pittman said.

After making the drive from her home in Winston-Salem to Salisbury early each morning to begin the baking process, Pittman and her husband moved to Rockwell in early January. The move to Rowan County has cut her daily commute down significantly.

Pittman has maintained many of the local distribution channels as Fulton Street Bakery, which means her breads and baked goods can be found at the same local markets and stores.

Pittman has started to put her own stamp on the bakery as well, relying on recipes she’s collected from her mother, grandmother, aunts and other family members. Her speciality is red velvet cupcakes, which have won blue ribbons at state fairs in both Arizona and North Carolina. She also makes apple turnovers, banana bread, muffins, bagels and more. Pittman still makes breakfast cookies, a Fulton Street Bakery staple. One of her most sought after items is salt-rising bread, which relies on naturally occurring bacteria to rise instead of yeast and is made with a starter composed of potatoes.

Pittman said she hopes people won’t just buy her products from local markets and stores, but will also visit the shop on South Fulton Street.

“My goal is to make this more inviting to have people come in, have coffee, socialize, have a meeting and get pastries and things like that,” Pittman said.

When the weather is nice in the spring and summer, Pittman said she will have patio seating outside in front of the store. She’s mounted TVs on the walls and has tables and chairs for people to sit. The store has an espresso machine to make specialty coffee drinks. Tea is offered as well.

When customers come into the shop, they can see the Holly Hobbie oven that started it all in the upper window sill above the front counter. Pittman said it still works, but that it mainly serves as a reminder of what started her love of baking.