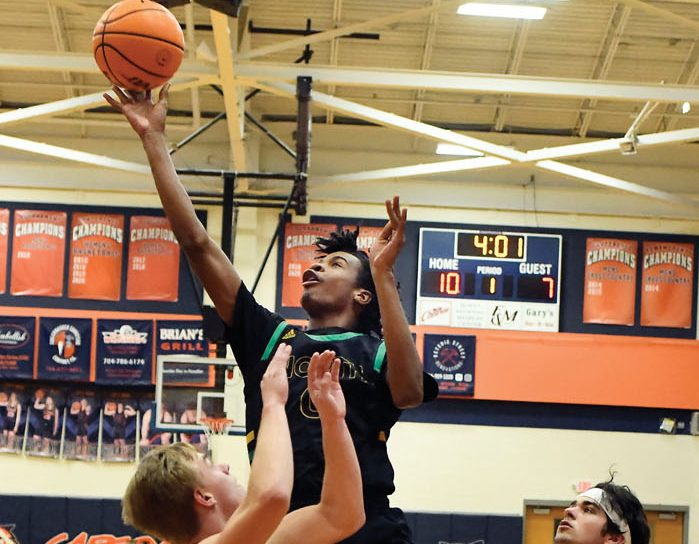 Derrick Hanson had 11 points in the first quarter Tuesday night to lead the Cavaliers. File photo by Wayne Hinshaw, for the Salisbury Post

North’s boys basketball team didn’t get off to a great start against South Stanly, ranked 49th among the 52 teams in 1A West, but Charleston scored 11 in a 25-point second quarter that propelled the Cavaliers to a 34-16 halftime lead.

Then North racked up 49 points in the second half for an easy 83-48 victory.

“We didn’t have a girls game or a jayvee game tonight, so the crowd was a little sparse and it took us a bit to get rolling,” North head coach Jason Causby said. “Jericho came in and provided a big spark.”

North’s depth, length and speed were the biggest factors in the blowout. North (14-3) got scoring from 12 players in the non-conference game.

North is 12th in the 1A West RPI rankings and still has a couple of big regular-season matchups next week in the 1A/2A Central Carolina Conference with Lexington (19th in 2A West) and Salisbury (9th in 2A West).

Derrick Hanson led  the Cavaliers with 16 points. Charleston had a season-high 12 points and four assists. Quashawn Carpenter scored eight of his 12 points in the fourth quarter and had five assists. George Maxwell had eight points and four steals. Pharrell Hailey led the rebounding with 11. Jalen Smith made a couple of 3-pointers in the third quarter.

Drew Gaddy was shut out in the first half but made four 3-pointers in the second half to lead the Bulls (3-17).

The win was the 241st for Causby as a boys head coach in Rowan County. Causby is 11 wins behind Hall of Famer Bob Pharr, who is fourth all-time.

West Davidson visits North Rowan on Friday night and the Cavaliers will be celebrating Senior Night.