RSS school board drills down district direction in eight-hour retreat 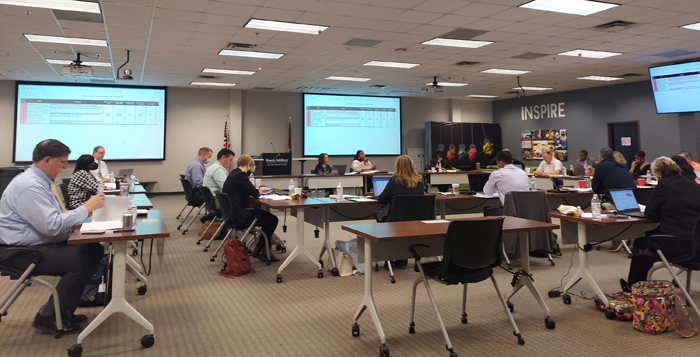 Carl Blankenship/Salisbury Post - Most of the higher ups in district administration congregated to speak to the board about the strategies being implemented by their departments.

SALISBURY — The Rowan-Salisbury Schools Board of Education held its annual retreat on Tuesday, holding a wide-ranging discussion about the direction it wants to send the district.

The eight-hour meeting at the Wallace Educational Forum focused on strategies to implement goals the district set for its upcoming strategic plans, and they are comprehensive.

The goals cover everything from operational efficiency to academics. Dozens of strategies were discussed, and the school board gave direction to a room full of district administrators and received briefings from the administration on its plans as well as expectations from the state.

Details from key conversations during the meeting included:

• The board discussed providing better guidance to older students as they look ahead to high school graduation.

Board Chair Dean Hunter noted his passion for providing good advice and options to students, including through career and technical offerings. He noted his own experience in high school feeling he was not guided well. Hunter said he wants to provide a better experience to current students.

Brian Hightower suggested bringing in community members in areas students are interested in. Superintendent Tony Watlington asked to take on that possibility as a homework assignment.

Hunter floated the idea of an early college equivalent for career and technical education, pointing to the high ranking of the district’s programs. Career and Technical Education Director Holly Pore asked to sit on the idea.

Hunter said he wants to make more time to talk about CTE in the future.

• The district will begin to implement the “science of reading” in the fall. The research-based methodology has been rolling out across the state and has been pushed by State Superintendent Catherine Truitt.

Hunter and Hightower were critical of the state’s required implementation.

Hunter criticized the idea of people with less experience trying to advise teachers with decades of experience teaching literacy. Hightower was critical of the extra burden placed on teachers.

Watlington responded by pointing to a notable success story: the entire state of Mississippi shot up from one of the lowest-ranked states in reading to the middle of the pack after implementing the method.

Watlington said the district is also exploring compensating teachers for training, similar to the implementation by a nearby district.

• Chief Technology Officer David Blattner spoke to the board about developing a new comprehensive data system. Blattner said the goal is to create a system that analyzes data and gives the district useful information, including for use with multi-tiered system of supports, or MTSS.

Another strategy in the same category as the new data system is to relaunch MTSS, which is a framework that has been required by the state for years. At its most basic, MTSS is how the district caters to the needs of each student by recognizing the support they need.

Blattner referred to the phenomenon of some organizations being “data rich and information poor,” noting the district wants to avoid that issue.

Chief Academic Officer Jason Gardner said the district received feedback about some of the classes being confusing. Watlington said he knows it’s not perfect as the district works on the pilot programs, but added that they’re needed.