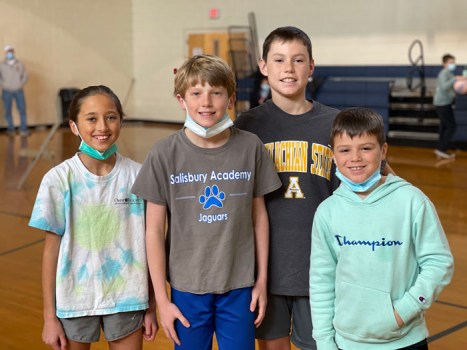 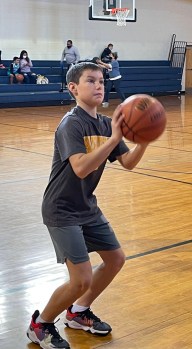 Bryant Davis sank 22 of 25 free throws to win the boys championship in the 12-13 age division at the District Elks Hoop Shoot contest in Winston-Salem on Saturday.

The eighth grade student at Salisbury Academy will compete in the state competition on Feb. 12 in Greensboro.

“I’m really excited to return to the state contest,” Davis said.  “I know what it takes to win at this level.”

The 13-year-old hoopster likes to practice almost as much as he likes to compete. On Saturday morning before leaving for the district contest, he was in Salisbury shooting free throws at an outdoor court in the 28-degree weather.

“I want to go to the regionals and nationals. But, first, I need to concentrate and prepare for the state contest. I’ll continue to practice, have fun and give it my best shot,” he said.

In the boys 10-11 division, Wyatt Graham, a fifth grader at Salisbury Academy, finished in second place in a triple overtime thriller. At the end of regulation, Graham was tied with Jason Womble from Lake Norman after making 20 of 25 free throws. In the first overtime, each player sank 4 of 5 free throws.

“I felt good while I was shooting,” Graham said. “It’s the watching and waiting that makes you nervous. I just kept telling myself to relax and to breathe.”

In the second overtime, both were a perfect 5 for 5. In the final round, Womble outlasted Graham to win.

“This was probably my best day shooting free throws,” said Graham, who finished with an impressive free-throw percentage of 78%.

“I had a lot of fun and enjoyed the competition. I’ll definitely return next year.”

“This was incredible to watch. I’m glad I have it on video or no one would believe it.  Both boys were on fire from the line. Wyatt has a desire to win that you just can’t teach. He stayed calm and focused and did his very best. I’m so proud of him.”

In the boys 8-9 age group, Stewart Adams Jr., a second grader at Sacred Heart Catholic School, finished in second place in his first district event. He connected on 13 of 25 free throws.

“Team Salisbury was amazing today,” said Liz Tennent, Salisbury Elks Lodge #699 Hoop Shoot Director. “Bryant, Wyatt, Elle and Stewart competed with a lot of heart and tenacity.  They represented our local Elks lodge and community in the best ways, on and off the court. I’m so grateful to them, their families and everyone involved with the Elks Hoop Shoot for another safe and wonderful experience.”

State winners advance to regional competitions in March and the national finals will be on April 30 in Chicago.