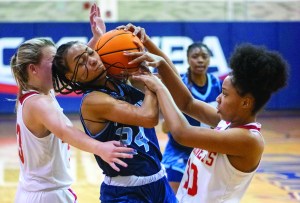 The Hornets led 29-2 after the first quarter.

Kyla Bryant scored 11 of her 21 points in the first quarter. Rachel McCullough added 17.

North Rowan (13-6) got down 14 points in the first quarter but settled in and played well after that.

Hannah Wilkerson scored 16 for the Cavaliers and had five assists, four rebounds and two blocks.

“Slow start and tough to get into a rhythm,” North Rowan coach Anthia Smith said. “We kept pushing and had a better second half, but we need to put four quarters together.  North Meck has a great program, and they said good about our team.”

No boys game was played.

West Rowan defeated Asheboro in the first round but lost to North Henderson  in the second round of the 3A dual team playoffs on Monday.

Davie advanced in 4A with wins against Weddington and Northern Guilford.

Davie will wrestle Northwest Guilford in the third round. The winner of that match wrestles the Hickory Ridge-Lake Norman winner.

Catawba men’s lacrosse was picked to finish sixth in the South Atlantic Conference out of 11 teams. Defender Payton Leonard was a first team preseason All-SAC pick.

Catawba softball tied for seventh (out of 13) in the preseason poll for the SAC.

Lincoln Memorial is the favorite. Anderson was picked second and Lenoir-Rhyne third.

Bryanna Troutman (Salisbury) scored 30 points on 13-for-18 shooting in Wingate’s 81-57 win against Lincoln Memorial on Saturday.

Troutman had 10 rebounds and four assists.