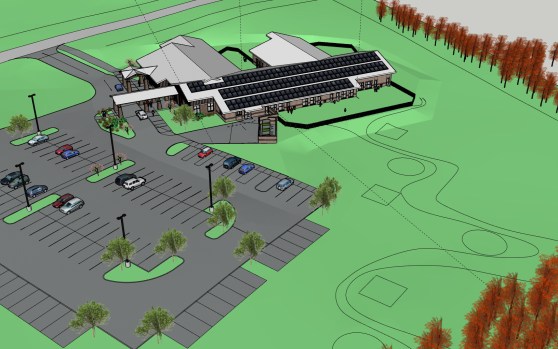 A rendering of the main building and parking area. 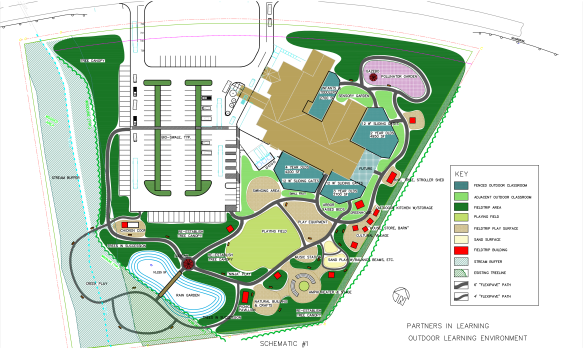 A schematic of the planned development of the facility and grounds.

SALISBURY — Partners in Learning has more than $10 million for its new center and plans to begin construction this spring.

The nonprofit has raised or generated close to 90% of its current goal of about $11.5 million and is planning to break ground on the project in May. The cost of the project has increased with construction costs, but fundraising has been so successful that PIL has set its sights on doing more.

The project will now include two more classrooms than originally planned and the full development of an 8-acre site on Martin Luther King Jr. Avenue to include an amphitheater and play areas. Executive Director Norma Honeycutt said the outdoor space will be open to the community, and the goal is to create a space that lets local families enjoy the natural habitat.

The current floor plan includes wings with classrooms for infants through school-age kids. Each wing will include an observation space where visitors can see what is happening. There will be two outdoor learning classrooms attached to the building and a family support wing with a community outreach center, a science, technology, engineering and mathematics lab, parent education and clinical services.

The family support center will have a separate entrance from the child care center. The plan also include space for four future classrooms to be added to the facility. Honeycutt said two of those classrooms will be bid out separately and built initially as part of the expanded project.

The nonprofit’s largest, recent infusion of money was $4.7 million from the state budget in late 2021. The project also recently received a $150,000 donation from the Cannon Foundation and $125,000 from Food Lion.

The amount of money the organization has raised in the previous year has floored Honeycutt. She said people want to be a part of the new center. In the previous week, two people have reached out to her interested in serving on the nonprofit’s board.

“I sit around half the time with my mouth dropped open that this has happened,” Honeycutt said. “It’s a miracle. There’s no other way to look at it.”

Honeycutt attributed the success of the campaign to a few things coalescing at the right time: the need for a new center as the nonprofit is preparing to move out of its Catawba College site, the chance to offer nonexistent services in Rowan County and the rapidly increasing need for child care.

In June, the Post reported the nonprofit has a waitlist of more than 360 children. That number has ballooned to more than 500. Honeycutt described the dearth of child care as a crisis.

New plans for the facility will allow PIL to take 60 more children, which Honeycutt said is a start on the large backlog.

The facility will also offer mental health services to children, including applied behavioral analysis. PIL is already hiring staff for its clinical services.