Winter Flight returns to Catawba College with hundreds of runners 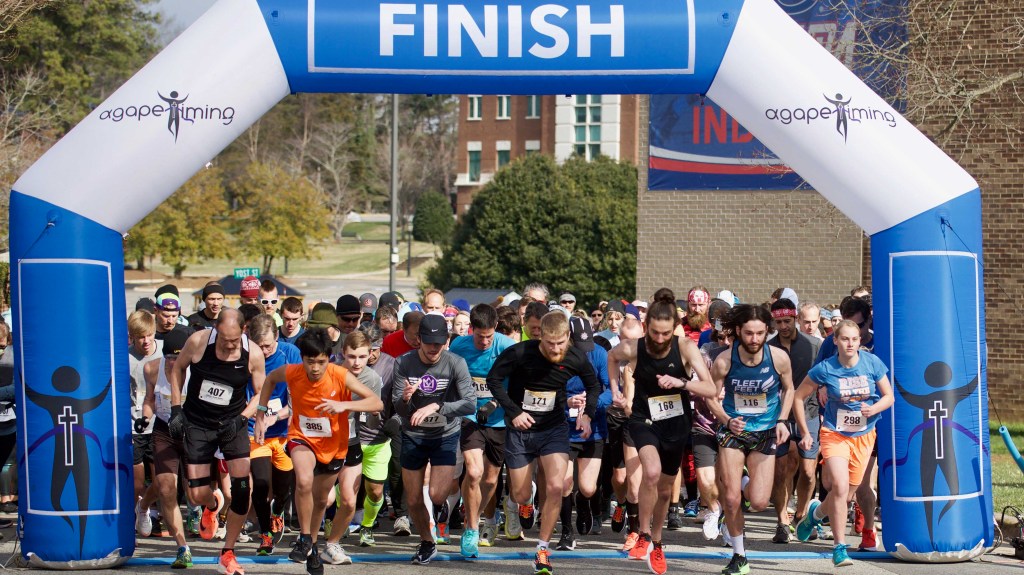 Carl Blankenship/Salisbury Post - Runners at the starting line on Sunday.

SALISBURY — After it moved out in the county for a year, the biggest foot race in Rowan came back home Sunday for its 39th year.

Winter Flight, a decades-long tradition, moved out to the Millbridge Ruritan Club in 2021 and returned to Catawba College on Sunday. More than 400 people signed up to race. That was up by more than 100 runners compared to the 2021 race in Mt. Ulla. Salisbury-Rowan Runners President David Freeze credited the spike in participation to returning to the old venue, noting the route has been unchanged for decades other than the change of venue in 2021.

The number of participants make it the largest athletic event in the county in addition to being the association’s biggest race. Runners picked between running a 5K or an 8K.

“It has people from four states, at least,” Freeze said moments after runners started.

Freeze said the running association had to move venues last year because the city would not support the race. Without city services such as the police department available, the race could not go on in Salisbury.

Jonathan and Matthew Martin, twins from China Grove that placed second and first in last year’s race, placed well again this year. Matthew came in first in 2021, but Jonathan was in the top spot this year with a time of 24 minutes and 35.45 seconds for the 8K run. Matthew came in third, outpaced by Eric Westog.

The race opened with Ainsley’s Angels. The organization pairs runners and people with special needs so the latter get a chance to participate in endurance sports.

The route and the location are not the only long traditions of the race: It has benefitted Rowan Helping Ministries since 1994.

RHM Executive Director Kyna Grubb said the organization receives anywhere between $10,000 and $14,000 from the race, depending on the year, but the partnership between RHM and the runners is bigger than the race.

“They volunteer in Jenny’s Kitchen and are getting up on 2,000 hours,” Grubb said. “They stepped in when all our other volunteer groups had to cancel for COVID. They’re there a couple times a week serving lunch for our residents.”

The money goes to general operating expenses such as running the nonprofit’s shelter, crisis assistance and helping people stay in their homes or cover utility bills.

The run was sponsored by New Sarum Brewing Company, which debuted a new creation for the event. The alcohol-free and running-appropriate beverage made from 100% canned Salisbury municipal water is dubbed “Just Water” and presented in New Sarum-branded cans.

New Sarum Founder Andy Maben said the brewery has its own run club and the idea to can water was conceived as a quirky marketing tool to give to local races.