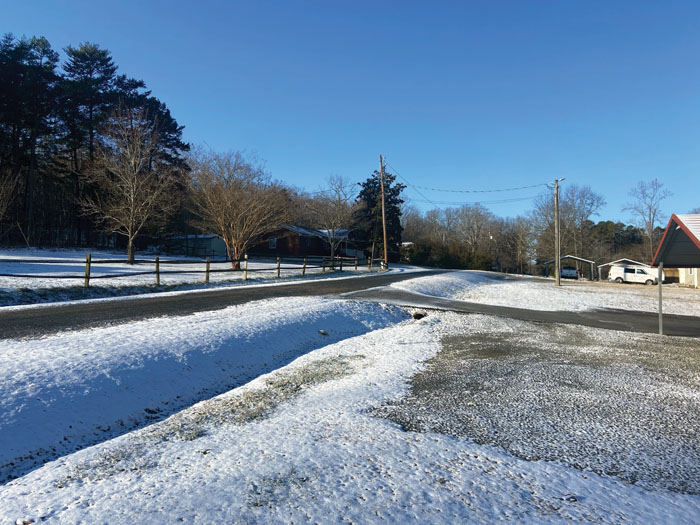 Light dusting of snow in Faith. Photo by Maddie Wagoner.

SALISBURY — Rowan County saw a light dusting of snow on Friday evening and Saturday morning, but by late morning on Saturday roads were largely passable and Duke Energy was reporting zero outages in the county.

The snowfall was light, and Rowan County Weather’s Steve Monday estimated about a half-inch fell in the western Rowan community of Atwell. But the storm also marks the third weekend in a row in 2022 there has been some snowfall and freezing temperatures, with about 5 inches of total snowfall in January. January 2021 only saw a half-inch and there was no snow in January 2020.

This month has been unusual for the 21st century, but Rowan County has recorded snowfalls that massively outpace this year’s total. In 1962, the snowiest January on record was recorded with Salisbury’s two weather stations recording 15.7 and 20.5 inches.

The totals topped a previous large snowfall in March of 1960 and started early in January. On Jan. 2, 1962, the Post reported snow, ice and fog with temperatures dropping to 25 degrees overnight. Local schools closed and the paper at the time, unfortunately, described the snow as “too slushy for good sleigh riding,” but ideal for snowballing and making snowmen.

“Plenty of these activities were observed,” the writer noted.

A week later, on Jan. 9, the Post reported receiving three inches overnight with a sunny afternoon the following day. On Jan. 29, the Post reported the largest snowfall since the storm in March 1960, bringing January’s total to more than 15 inches and the fourth snowfall that month. March of 1960 recorded only 9.25 inches of snowfall.

Between March 1 and March 2, 1927, 20 inches of snow landed on Rowan County. The roof of the local YMCA collapsed. In 1960, a Post writer described it as the yardstick for measuring all other snowfalls in the county. A campaign to bring a YMCA back to Rowan County began in 1955.