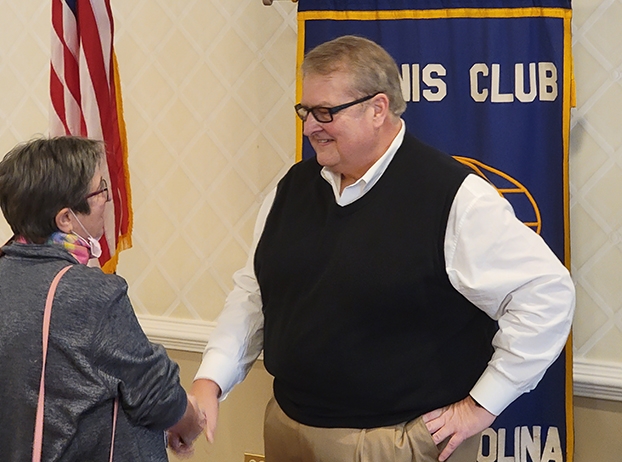 Kevin Auten briefly considered riding off into retirement before his term was up.

Auten told the Salisbury Kiwanis Club Friday he seriously considered retiring from law enforcement two years early and handing the reins of the sheriff’s office to Tim Wyrick, who retired at the rank of major from the Rowan County Sheriff’s Office in 2020.

But like all important decisions, Auten asked the opinion of his 89-year-old mother. Becky Auten’s response was “No way.” If Auten’s father, Gene, was still alive, he’d say the same thing, Becky said.

“You signed up for a four-year term,” Auten recalled his mother saying.

So, instead, Auten made it known quietly he wouldn’t seek re-election. Candidates heard the news, too, and have since created a crowded field for the county’s top law enforcement officer position.

Auten, meanwhile, is thinking about retirement jobs. With his mother still in the working world, Auten may have a hard time finding an excuse to give up work entirely. His hope at the moment is to mow the grass at Cauble Creek Vineyard after he wraps up his career. There, the stress level will be much lower than leading the Rowan County Sheriff’s Office.

During Friday’s Kiwanis Club meeting, the outgoing sheriff reflected on his career, recent law enforcement changes and answered other questions. He stayed away from talking politics, including the ongoing sheriff’s race.

Auten said the Erica Parsons case was the most challenging of his career. Parsons was a 13-year-old girl who was neglected and abused by her adoptive parents, Sandy and Casey, before she disappeared. Casey Parsons pleaded guilty to first-degree murder in the death of Erica. Sandy Parsons also pleaded guilty in her murder. Both also received a sentence for fraudulently receiving benefits for Erica after her death.

Auten said that good planning and the hard work of detectives, particularly Maj. Chad Moose, were key in solving the case.

“He took the thing on and just kept going,” Auten said.

Auten said the Rowan County Sheriff’s Office was publicly hopeful Parsons would be found following a missing person’s report in July 2013 by Jamie Parsons, the son of Casey and Sandy Parsons.

Privately, Auten said, investigators believed Parsons was dead before the missing persons report was ever filed.

In 2013, Jamie Parsons said Erica had been missing since November or December 2011. In the week prior to her disappearance, she was described as gray-looking with sunken eyes, smelling bad, oozing, open cuts, weak and complaining of not being able to breathe, according to a report released in 2018 by the Chief Medical Examiner’s Office in Raleigh.

Auten said that homeschooling made it easier for Erica’s physical state to go unnoticed because there weren’t teachers or classmates seeing her every day.

He also said the Rowan County Sheriff’s Office intentionally didn’t seek media attention or agree to interviews every time there were new developments in the case.

Auten talked about the Juvenile Justice Reinvestment Act passed in 2017, which raised the age at which suspects are automatically charged as adults. The increased age barrier went into effect Dec. 1, 2019.

He initially believed 16- and 17-year-old teens were “going to get away with” crimes until they turned 18 as well as that juvenile jails would be filled to capacity.

“But the numbers don’t show that,” he said.

When 16- and 17-year-old teens are placed in the same facilities as older offenders or suspects, there’s a higher chance for them to learn bad behaviors, Auten said.

He said that drugs, particularly methamphetamine, heroin and fentanyl, are much more significant concerns now than earlier in his career.

“I think I only arrested one person for heroin, and we do it daily now,” he said. “It’s just changed that much.”

As evidence of that, Auten said he receives reports twice per day about jail book-ins and they often feature inmates who need to detox from one of the three drugs.

Auten’s retirement will end 35 years working for the Rowan County Sheriff’s Office. A deputy since 1987, Auten was promoted to chief deputy in 2009. He became sheriff in 2010 following the retirement of George Wilhelm and earned his first term the same year amid of large field of candidates.