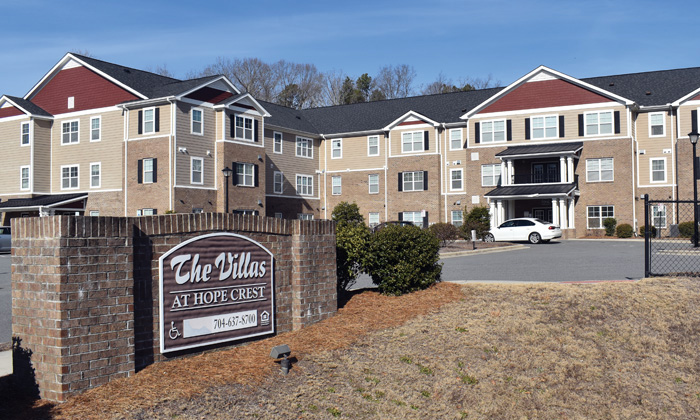 Residents of Villas at Hope Crest have grown frustrated over what they say has been a lack of management and a recently-introduced online portal system that has been difficult for some older residents to use. Ben Stansell/Salisbury Post

SALISBURY — When Anna Jenkins moved into Villas at Hope Crest in 2016, she was filled with gratitude and optimism.

The veteran and her beloved service dog had been homeless before a task force of community organizations helped her find a unit in the complex at 1314 Lincolnton Road. The Villas at Hope Crest provides housing for people older than 55 living on a restricted income. The property receives funding through the Low Income Housing Tax Credit program facilitated by the United States Department of Housing and Urban Development.

The complex is owned and operated by InterMark Management Corporation, which owns dozens of residential properties of various types throughout the Southeast. InterMark is headquartered in Columbia, South Carolina.

While Jenkins was once proud to call the Villas at Hope Crest home, she and some other residents say they have grown increasingly frustrated by unfulfilled maintenance requests, a lack of onsite oversight and recent confusion about online rent payments.

Kathy Ladd, a resident of the Villas at Hope Crest, describes the apartment complex as “a forgotten island.”

“When you voice something, nothing is being done,” Ladd said.

Ladd and Jenkins said matters were made worse when InterMark introduced an online portal through which it is requiring residents to submit work orders for maintenance and pay their monthly rent. While providing services through an online platform is a common way apartments now operate, some older residents at the 55 and up complex have experienced difficulty understanding, accessing or operating the new system.

Some residents have family members who have helped them access the portal, but others don’t have nearby relatives to do the same, Ladd said.

The online portal system was announced in early December. Not long after, Ladd said several residents confronted the apartment’s manager about frustrations related to the portal. The manager left the complex after that incident, according to Ladd.

Sylvia Ogni, who has lived at the Villas at Hope Crest since 2014, said she was told InterMark would accept physical rent payments in the local office for January because the portal was not operating properly. Ogni slid her check through the office dropbox as she had many months before, but she was surprised days later to receive notice that she had not paid rent. As a result, she was being assessed a late fee and informed that eviction proceedings would start if she did not pay.

Ladd’s brother, who also lives at the Villas at Hope Crest, was assessed a late fee as well.

Cynthia Smith said her 92-year-old mother, who has been living at the complex since March, was equally shocked when she received a similar notice in early January. The notice came despite the fact that Smith submitted her mother’s rent payment in the slot outside of the front office.

Ladd said she believes the notices came because no one from InterMark visited the office to collect the physical rent payments.

Since then, both Smith and Ladd have been assured by an InterMark representative that no late fees will be assessed and that residents should not worry about the notices they received. Ladd said the physical rent payments in the dropbox have since been collected. Still, Ladd is concerned about what might happen when residents attempt to pay their rent in February.

The complaints go beyond the portal. The three residents also say that work orders submitted for smoke detectors, hallway lights and personal lights inside their units have gone unfulfilled. When they’ve attempted to contact a representative from InterMark, there has been little response.

The office hours at the Villas at Hope Crest are listed as being on Monday and Wednesday from 9 a.m.- 5 p.m. and Friday from 1-5 p.m. However, signs posted on the door in early January informed residents the office was closed due to COVID-19. Another sign has told residents not to knock on the door because the office would be working by appointment only for two weeks. The sign directed residents to call and leave a voicemail or to email management.

Even before the most recent property manager departed, Jenkins said management turnover is something that has plagued the Villas at Hope Crest for years. Jenkins said there have been about 12 different managers since she started living at the complex.

Smith said InterMark has not been able to keep a consistent manager in the onsite office and that no one has been there for the residents in the past month.

Safety, too, has become a concern for the residents. Ladd said there have been two recent incidents in which a non-resident was causing problems on premises, prompting her to call 911 to request police help. On one occurrence, Ladd said the person vandalized property in the apartment hallways. On the other, the person was drinking alcohol in the complex’s common area.

After receiving an email from a resident at the complex, Salisbury Code Services Manager Michael Cotilla visited the Villas at Hope Crest last week. The complaint Cotilla received was about safety at the apartments. Cotilla said he observed that doors to the facility were locked and seemed to be secure. Prior to that email, Cotilla said he is not aware of any code enforcement issues at the apartments.

Despite multiple attempts, InterMark management could not be reached for comment on this story.

Searching for a career outdoors, Litaker blazes his own…