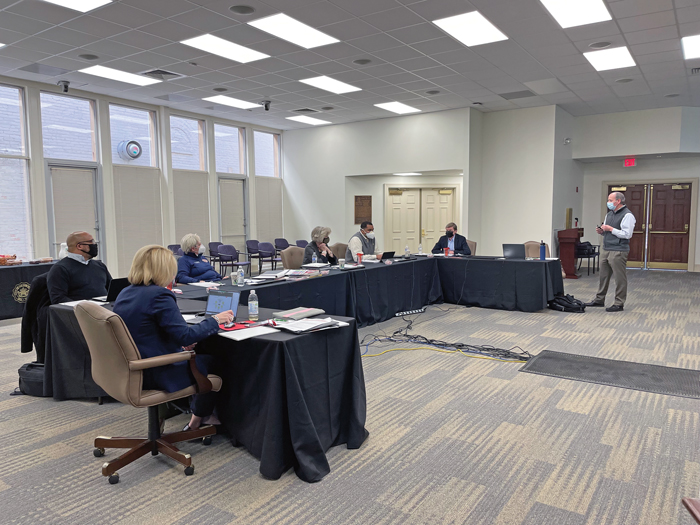 Natalie Anderson/Salisbury Post — Salisbury City Council members gathered at City Hall Thursday for the first of its two-day annual planning retreat and goal-setting for 2022. The retreat is moderated by Warren Miller of Fountainworks Facilitation and Management Consulting.

SALISBURY — The city is considering a microtransit pilot program that would allow its transit system to operate on-demand, with ride-hailing services similar to companies like Uber and Lyft instead of buses.

During the Salisbury City Council’s annual retreat Friday, Rodger Lentz, who works for the city of Wilson, reviewed the eastern North Carolina city’s own microtransit service, which launched in September 2020. While Lentz said the city decided to pull the plug and move all transit operations to the on-demand model all at once, Salisbury Transit Director Rodney Harrison has asked the City Council to consider a pilot program testing out just one route for at least a year.

Such a model is cropping up in cities across the Southeast and locations such as Roanoke, Virginia, and Morrisville in Wake County. Like Uber and Lyft, riders can request a ride and get paired with other riders traveling the same route. This also allows for smaller vehicles such as minivans, which are used in Wilson. Lentz said vehicles can fit six passengers, but pandemic precautions have limited it to four.

Lentz said challenges with the city’s traditional routes included limited coverage, less frequency and higher costs. The new model is touted as having increased access, convenience, flexibility and reduced wait times. While the goal is a 15-minute wait time, the average wait time for the vans is around 19 minutes due to vehicle issues attributed to the pandemic. Additionally, Wilson’s former transit service serviced about 1,450 trips per week, while the new system has about 3,500 trips each week. RIDE, the name of Wilson’s system, operates about 600 rides per day, Lentz said.

Wilson’s service saw about 2,591 unique riders a year after its launch, with that number now closer to 3,600. Lentz said 35% of riders take at least five trips each month, and 40% of all riders serviced make less than $25,000 annually. Additionally, at least half of all trips are for those traveling to work. Walmart is the most popular destination.

Lentz added that most riders are seniors, people with disabilities, unbanked or without access to a smartphone. To accommodate some of those needs, the city offers discounted rates and bus cards that can be purchased when customers pay their utility bills, for example. Additionally, the system allows for people to call for a ride if they’re unable to access the smartphone application, and some bookings can be made door-to-door.

Lentz said Wilson decided to contract with a third-party provider, Via, which handles maintenance, operations, the vehicle fleet and personnel. However, municipalities can also purchase technology for in-house operations, which Harrison recommended to track ridership and other data with the department’s own personnel.

Lentz said the cost to the city of Wilson is about $11 per ride, which falls below the average charge for other on-demand transit models seen across the state. Riders are charged the price of a typical bus fare, around $1.50, with discounted rates of $1 for additional riders. Children under the age of 8 ride at no cost. Unlike Uber and taxi services, the city charges a flat rate so the rides aren’t charged for the distance.

Lentz clarified the system is recognized as public transit by the Federal Transit Administration. So, it’s still funded with federal dollars. Proper training and ADA compliance is required.

Council member David Post asked Lentz if it’d be more efficient to operate the program in-house. Lentz said relying on the third-party company to handle the vehicle fleet has been more efficient compared to going through the local government, which often doesn’t move fast enough.

Post said he liked Wilson’s idea of “cutting the cord” and jumping right in and added the uneven wait times for those who aren’t in the pilot route may not be well-received. Mayor Pro Tem Tamara Sheffield agreed and added that she trusts Harrison’s judgement. Harrison said the program has been successful in several places, but not everywhere, and the pilot program would allow the city of Salisbury to examine how it could work here.

“If it does not work well, we still have the resources to provide a mobility option for our citizens,” Harrison said.

Harrison said that route was selected because it’s the least traveled and would allow him to better analyze the increase in ridership if that is a result of the pilot program. The pilot program also includes an ADA/paratransit route. Harrison added that the ADA transit already functions similar to the on-demand concept, except riders have to call and book the day before.

Harrison plans to provide the City Council with more information regarding the potential impact on grant funding and how much such a program would cost. He said council members would have discretion at how it’s carried out, which includes determining the hours, fare fees, service zones and whether the department should operate in-house or contract with a third-party. While fixed routes don’t currently serve areas along Interstate 85 such as Chewy, an on-demand service could allow the city to broaden its reach to serve those who are employed there.