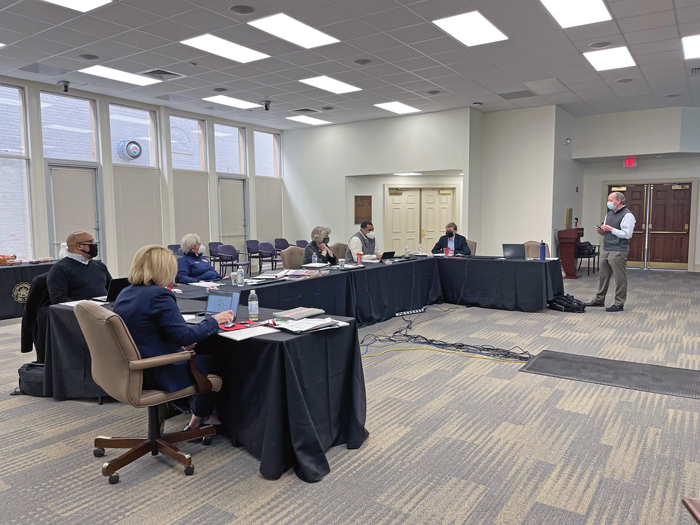 Natalie Anderson/Salisbury Post — Salisbury City Council members gathered at City Hall Thursday for the first of its two-day annual planning retreat and goal-setting for 2022. The retreat is moderated by Warren Miller of Fountainworks Facilitation and Management Consulting, standing at right.

SALISBURY — City Council members on Thursday discussed ways that greater investment in the Parks and Recreation Department and its youth engagement programs can affect the city’s crime.

Both Salisbury Police Chief Stokes and Parks and Recreation Department Director Nick Aceves presented departmental needs and how the two can work to combat the rising crime. Stokes said police follow a “stratified policing model,” which employs evidence-based practices through problem solving, analysis and accountability. The most important strategy for the department is “hot-spot” policing, he said, which uses data to focus on the areas where crime is happening most frequently and severely. Stokes said focusing on these key areas continues to be an evidence-based strategy, but the department is in need of enhanced gang intelligence gathering capability to better identify those involved in violence.

Additionally, while foot patrols and increased police visibility have been effective on crime and citizen fear of crime, staffing limitations have been a challenge, he said.

From 2004-2011, Salisbury employed a Project Safe Neighborhoods Program coordinator and paid for the program through the use of grants. In 2017, it became a countywide collaboration jointly funded by the Salisbury City Council and Rowan County commissioners, but the county cut its funding for the program in 2020, Stokes added.

Stokes said the Rowan Project Safe Neighborhoods program has been effective in past years, but it needs a revamp. He recommends focusing more on providing services to offenders with alternatives to violence, which can be done by developing a community-based, multi-agency initiative.

“I think we can do better in this program,” Stokes said.

That’s where the city’s Parks and Recreation Department comes in. Aceves cited the recent $800,000 grant to enhance the West End neighborhood and said similar measures could be expanded across the city. He noted the success of summer camps for K-5 students and after-school programs that have been halted during the pandemic.

Aceves said the city has been successful over the years in securing grants, donations and sponsorships, but those aren’t long-term, sustainable sources of funding and some more money from the budget is needed. He said Salisbury’s amount of investment in programming and special events funding for Parks and Recreation is less than the surrounding communities. While Salisbury invested about $63,600 to the department for special events and programming in 2020-21, Iredell County invested $141,900, Cabarrus County invested $325,000 and Kannapolis invested $854,000. Though Aceves said Kannapolis is a bit of an outlier in how much they invest.

Council members asked Aceves to return to the council with a priority list and budget amounts for the summer camp programs and any additional programs that could enhance the community’s overall well-being and safety. Aceves said staffing is an issue in his department as well, and facilities are in needs of upgrades. He added that the department has been discussing ways to utilize the Fred M. Evans Pool in the colder months to continue serving the area’s youth.

Currently, Aceves said the department can sponsor about 26 children for a summer camp and after-school program. But council members expressed interest in investing more money to reach far more children.

Mayor Karen Alexander said especially since the shooting at Catawba College last month there seems to be an opportunity for the city to collaborate with the county, which is expected to have millions more dollars to fund the school system thanks to COVID-19 funding, and partner with the Rowan-Salisbury Schools system to meet the children where they’re at.

“We should be getting our fair share,” Alexander said. “We’re in crisis.”

Council members noted the pandemic’s effect on children and the impact of not having such programs in place for children. Alexander said reaching children and providing them with opportunities to keep them off the streets can have an impact on the city’s overall crime. She cited the lower crime levels seen before the pandemic, the rising crime since the start of the pandemic as well as after Parks and Recreation ceased its youth engagement programs and said she “knows it can be fixed.”

“The data is there to show how important Parks and Recreation is to our city and the public safety money that we spend,” Alexander said. “It’s very powerful in terms of establishing where the problem is and how we can fix it.”

Stokes also cited an added element to the Rowan Project Safe Neighborhoods program, which is the now yearlong Cease Fire initiative. A partnership between SPD and the Salisbury-Rowan NAACP, it aims to increase community engagement and trains volunteers to step in as de-escalators to gun violence. Stokes said the community has seen some success after community walks were held in hot spot locations since the program’s inception in 2020. However, Stokes said after the program launched year-round in 2021 there’s only been one dedicated volunteer de-escalator, which is Salisbury-Rowan NAACP President Gemale Black.

Stokes said the programs in other places such as Chicago and Boston include paid staff who typically have a background in social services to assist. And since SPD currently doesn’t have any mental health crisis specialists who can join officers on relevant calls, the city may need to consider paid positions for de-escalators and mental health crisis co-responders. Such employees could also assist with referrals to the county’s Post-Overdose Response Team.

“I hope we take note that we’re in the middle of a crisis,” said council member Anthony Smith.