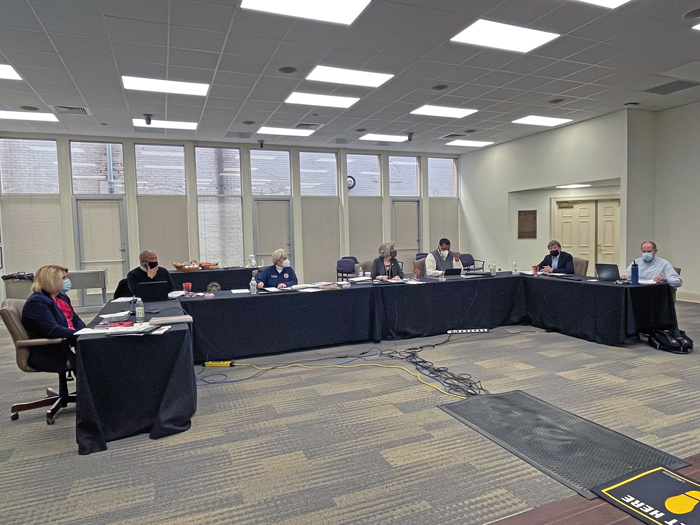 SALISBURY — City Council members were asked Thursday to consider options to address long-term recruitment and retention challenges across city departments as they prepare for the 2022-23 budget.

Council members received a number of presentations Thursday during the first day of its annual planning retreat, and members will continue today in the goal-setting session for 2022.

The 2021-22 budget is expected to have a $4.7 million surplus in the general fund in excess of the minimum fund balance reserves set by the council. Finance Director Wade Furches said the fund balance reserves, like a person’s savings account, should be used during periods of declining revenue, for emergencies and for unforeseen expenditures.

While the state allows a minimum fund balance of 8%, the city has an informal policy of keeping 25% of the total fund balance in reserves. The city’s fund balance is currently at 36%.

Furches said the city’s contribution costs for the state’s Local Government Employees’ Retirement System has risen significantly in recent years as workers across the nation are retiring earlier. He anticipates those costs will continue to rise. The city contributed at a rate of 12% to law enforcement staff in 2021-22, and 11.4% for all other employees. In the 2020-21 budget year, the city contributed 10.8% for law enforcement and 10.2% for all other employees. Both rates fell below 10% in the 2019-20 fiscal year.

The city has received a little more than 80% of its projected property taxes for the current fiscal year. Sales tax revenue is also is projected to come in $1.8 million more than the budget.

Staff members are putting together schedules for city expenses and payroll projections, with those details due to the Finance Department on Monday. Furches said the department will use that information to begin putting the budget together throughout March and April and assess critical needs as well as any budget savings. Furches added that he wants it to be a joint effort so that Police Chief Jerry Stokes and Fire Chief Bob Parnell, for example, can better understand challenges they’re both facing amid questions about adequate staffing and compensation.

Findings from a citywide pay study contracted through The MAPS Group are expected to provide more clarity about compensation across city departments. Interim Manager Brian Hiatt said there will be discussion during the budget planning process about how to implement those findings, which are expected to be presented before the budget must be adopted in June. Questionnaires among all employees have been completed, and the firm is currently conducting interviews across departments. A draft report is expected by April 1, with a presentation to council mid-to-late April.

The first budget discussion is anticipated for May, said City Clerk Kelly Baker. It must be adopted no later than June 30 as the 2022-23 fiscal year begins July 1. Baker said there’s typically opportunity for the public to weigh in on the proposed budget for about a month before it’s formally adopted.

Among the budget discussions for Friday is the city’s share of American Rescue Plan Act funding. The city was granted a total of $7.2 million, with the remaining half expected later this year. After spending about $1.5 million to grant city employees with premium pay for working throughout the pandemic and another nearly $62,000 to implement COVID-19 vaccine incentives, the city is left with $2.08 million currently and nearly $6 million altogether.

The council will discuss on Friday capital and infrastructure projects before deciding which to prioritize during its goal-setting session. Mayor Karen Alexander said rules for how ARPA funding can be allocated seem to allow for some capital projects, which may lessen the burden on the budget. She added the city has postponed its larger capital projects over the previous two fiscal years because of the pandemic.

After a comment from Hiatt about challenges of inflation on this particular budget’s operating costs, Alexander, an architect, also noted she’s seen construction costs up to 35% higher than traditional years.

Human Resources Director Ruth Kennerly said Salisbury is not unique in its challenges to recruit and retain employees, citing “the Great Resignation” and a shift in what all potential employees want out of their jobs today. Among the things employees value beyond salary include benefits, remote work, work-life balance, a good workplace culture, a diverse workforce and opportunities for development.

Overall, the city has 44 vacancies across all 460 positions, which includes council members and part-time employees. Kennerly said a new challenge has been departments posting job openings multiple times and other communities looking at how they can remain on the competitive edge.

Council member David Post asked how optimistic Kennerly is about where the city will be in a year. She anticipates issues will be around for a while. Additionally, a number of employees are eligible for retirement, which can impact the city’s personnel costs.

But Kennerly said challenges also provide opportunities in how the city can become “the employer of choice.” She added that she and other staff members continue to monitor trends regionally and nationally in hopes of “staying in the forefront.” For further retention efforts, Kennerly said the department has started conducting “stay” interviews with employees to better understand why they’re deciding to stay.

She also recommended pay studies become more regular, and requested the management team implement ways to keep up with pay and benefits, along with “outside the box” recruitment efforts. That also includes updating incentives for education and certification levels and policies that affect recruitment and retention citywide.