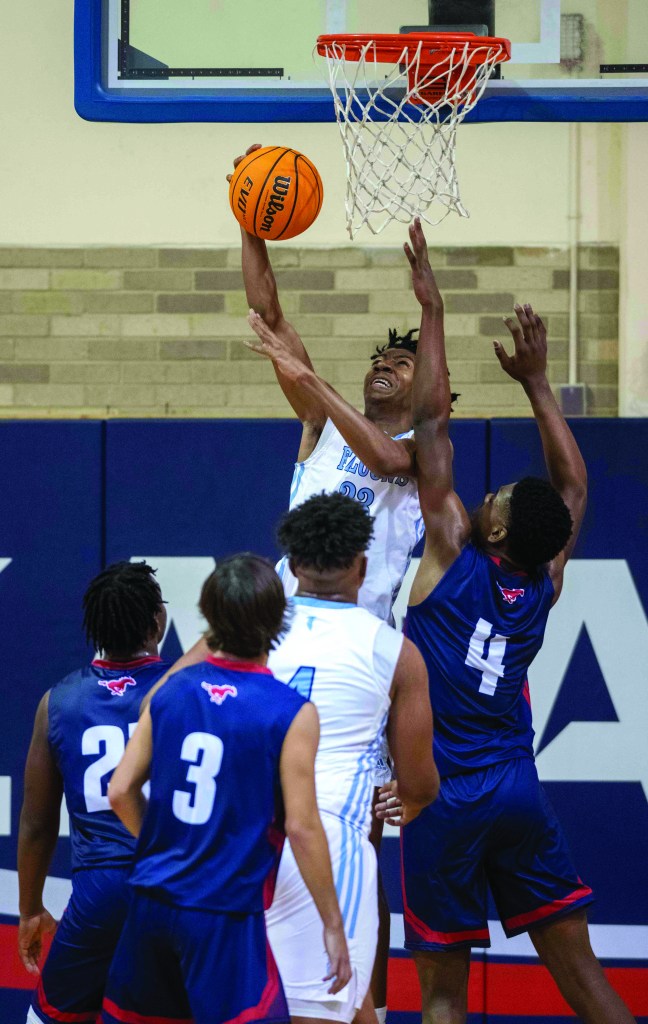 CONCORD —  Hall of Fame coach Mike Gurley has experienced 445 wins in 25 seasons at the helm of the West Rowan Falcons.

That towering mountain of victories has helped him handle the agony of 219 defeats.

Loss No. 219 on Coach Bo Court in Concord on Thursday was among the more painful ones for Gurley, at least as far as regular season games. West played hard enough to win and had every opportunity to win, but still lost to the Spiders 68-66.

The Spiders are quick, feisty and unselfish. They didn’t make many jumpers and connected on only three 3-pointers, but they earned points the old-fashioned way with putbacks, ,transition layups and free throws. They made 21 free throws, including 10 down the stretch.

It was a huge swing game, nearly a huge road win for West and nearly a huge home loss for Concord. As this frequently interrupted South Piedmont Conference season plays out, it could mean the difference between the Falcons finishing second — and finishing fifth.

Unbeaten Central Cabarrus is in in a class by itself at the top of the league, but it really should be a dogfight after that. Concord (14-3, 5-2) has a fine record, but there’s not a big difference between the Spiders, Lake Norman Charter, Northwest Cabarrus and West Rowan.

East Rowan can beat people, as it proved on Tuesday when it won on the road at Northwest Cabarrus. On a hot night, Carson also is capable of upsetting one of the upper-tier teams.

Thursday’s game began with Concord shooting — and making — two technical free throws. Maybe that was a sign it wouldn’t be a positive night for the visitors.

Both teams would shoot four technicals before it was over.

William Givens Jr. had a hot hand early for the Falcons (6-6, 4-3). His corner 3-pointer, as the first quarter closed, lifted West within a point of the Spiders.

When Givens made another bomb to start the second quarter, West briefly held the lead.

Concord pushed to a nine-point lead midway through the second quarter, and at 33-24, the Falcons appeared to be in major trouble.

An offensive rebound by 6-foot-9 Bryson Cowan led to two free throws and triggered a West comeback.  A loose ball bounced to Givens, who knew what do with it. He made a jumper for 33-28.

Competitive and athletic, Peter Williams-Simpson, who played his strongest game of the season, made two free throws. Then 6-foot-7 sophomore Levon Jacobs made one, as West got to the halftime break down 33-31. Concord didn’t score the last 3:20 of the half.

West slid behind by seven in the third quarter, but fought back again. Mostly, it was Williams-Simpson who kept West in it. He made some tough, bouncy hoops.

At the end of the third, Athan Gill got going. He scored on an offensive rebound, a driving layup and a 3-pointer in a span of 80 seconds, and the Falcons took a 52-48 lead to the final quarter.

Concord scored the first six of the fourth quarter to inch back in front.

With five minutes left, Concord’s Johnakin Franklin found Brayden Blue wide open for a layup after a halfcourt defensive breakdown by the Falcons. That put Concord ahead 57-53.

The game continued to take strange twists and turns. Josh Noble, the burly football lineman who plays some in the post for the Falcons, got his only two buckets of the night during the next minute. Gill made the nice pass to Noble for the hoop that made it Concord 58, West 57 with four minutes to go.

Kayin Thompson stepped to the foul line and calmly drilled two big ones for the Spiders with 1:45 on the clock. When Franklin swished two, the Spiders led 66-59 with 1:25 left.

Givens had been quiet in the second half after getting 13 in the first half, but he suddenly splashed a 3-pointer with just over a minute left. On West’s next possession, Givens passed to Jacobs in the right corner, and the tall youngster knocked down a 3 to trim Concord’s lead to 66-65 with 29 seconds left.

Smith made a pair of clutch free throws for a 68-65 Concord edge with 20 seconds left.

West point guard Kayvone Norman attacked and made one of two free throws, and the Falcons trailed 68-66 with 14 seconds to go.

Thompson missed two free throws for the Spiders, with 9.9 seconds left. He was short, and then long. Noble rebounded the second one, located Norman, and the Falcons sprinted.

Givens came off a screen by Noble, but he had been forced really deep and his rushed shot from about 5 feet beyond the 3-point line, wasn’t close. It caromed straight to Norman in the lane, but Norman’s putback attempt was swatted by 6-foot-4 Justin Garland. Then Noble got his hands on it. The big man’s desperate attempt, half-tip and half-push, beat the buzzer, but it was off the mark.

And it was over.

Givens scored 21. Williams-Simpson had 13. His previous high had been four. Jacobs contributed 12.

Franklin tossed in 21 for the Spiders. Smith scored 14, while Blue had 13. Thompson scored all nine of his points in the second half. He also had 14 rebounds.

More weather is coming, but West hopes to beat it and will try to get back up for a road game at Northwest Cabarrus tonight. Northwest won at West.

Concord is scheduled to host Carson.