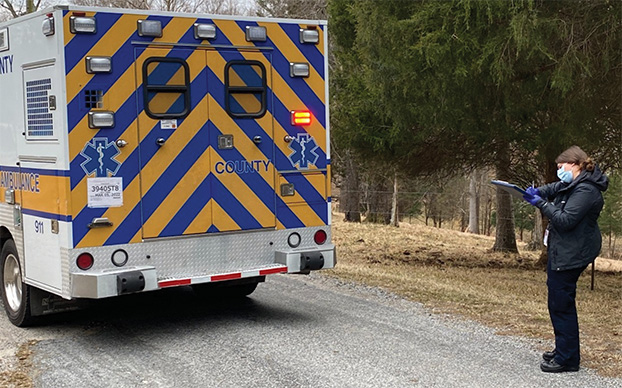 For most of January, Rowan County Emergency Medical Services has been aided by two FEMA ambulances. The fully-staffed units have helped lighten the workload for the division. In this photo, a paramedic from a FEMA ambulance makes contact with the Salisbury VA to gain acceptance for a patient. Photo submitted.

SALISBURY — Since the start of January, Rowan County Emergency Medical Services has had some much-needed extra help.

The county has been the beneficiary of two fully staffed ambulance units provided by the Federal Emergency Management Agency by way of the North Carolina Office of Emergency Medical Services.

“Our staff has worked really, really hard over the last couple of years,” EMS Division Chief T.J. Brown said. “To have this time of help in place gives our crews the time to be able to come in and not be so overwhelmed when they’re working.”

At the state’s request, FEMA granted North Carolina 25 ambulance units that have been deployed in various counties to assist local emergency medical service organizations strained by understaffing and the COVID-19 pandemic.

The two ambulances, referred to simply as FEMA1 and FEMA2, started in Rowan County the first week of January. Each ambulance is staffed by a two-person team. The two units have supported the county’s seven emergency medical service stations, which are spread geographically throughout Rowan. The units come at no cost to the county, Brown said, and are stocked with supplies and equipment.

The county received the two units after submitting responses to a survey detailing its staffing woes and emergency call load.

The county is currently hiring for 15 open positions and maintains a staff of 71 employees.

“Just like everybody, obviously we have some open positions we are recruiting for,” Brown said. “That’s commonplace throughout the state as well. There’s just not enough paramedics and (emergency medical technicians) to fill all of the voids.”

Brown said he thinks the COVID-19 pandemic may have exacerbated staffing problems by preventing would-be paramedics from being able to take in-person certification courses.

Already short-staffed, the Rowan County EMS division has been hit hard with employees missing work after testing positive for COVID-19 or being exposed to someone who has contracted the virus.

“We’re in contact with COVID patients and no matter how well we protect ourselves, there’s always a chance you get exposed however it happens,” Brown said. “We have people who are out due to COVID. That creates day to day openings as well as open positions.”

Brown said paramedics wear personal protective equipment including N95 masks when responding to calls, but even that can’t prevent potential exposure during some emergency situations.

With the two FEMA units on board, the county has 12 ambulances responding to emergency calls during peak hours. On average, Brown said, each of the FEMA units respond to about eight calls per 12-hour shift. Having the additional ambulances, he said, was especially helpful during the recent snow events.

While the two FEMA units have been helpful, they might not be in Rowan County for long. Brown said the state analyzes call numbers about every two weekends to re-evaluate which counties are in most need of the extra units. As a result, the two FEMA ambulances could be on the move to another county within the next few weeks.

“We’ve had the opportunity to have them and give us support for a month,” Brown said. “I’d love to have them for two months, but being a realist we have to be gracious and keep our partners in mind.”