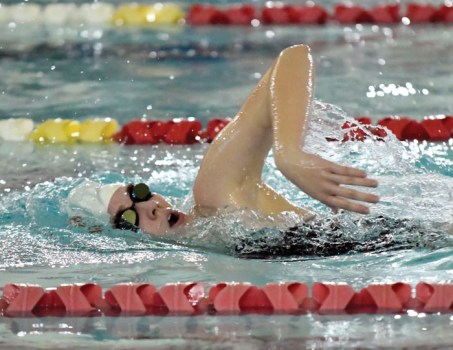 Carson's Ashlynn Coffer winning in the 500 yard freestyle.; photo by Wayne Hinshaw; for the Salisbury Post 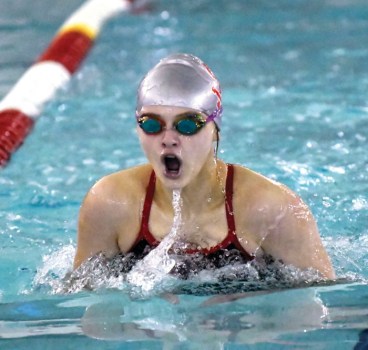 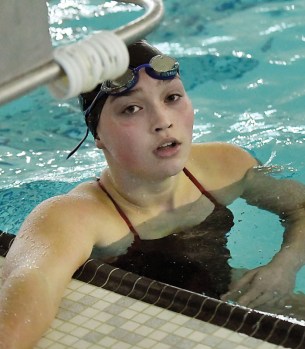 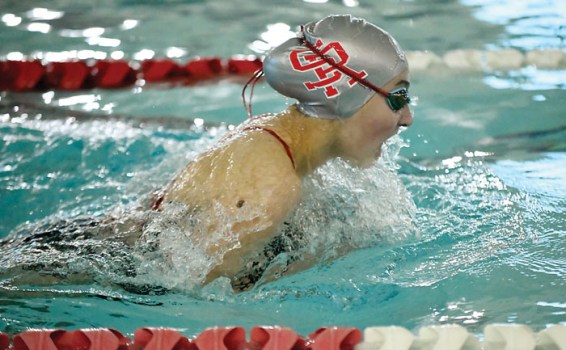 Aubree Thompson, who won the 50 freestyle and swam on the 200 free relay winner with Ava Blume, Bailey Fisher and Sydney Hughes, was the leader for South, which returned to the top of the county for the first time since 2015.

Salisbury’s girls had won all the meets from 2016-2020. COVID forced the cancellation of last season’s meet.

Salisbury was runner-up despite having four of the meet’s standouts in Sage Huffman, Kate Burton, Lucy Heilig and Ava Morris. That quartet combined to win six individual events and two relays, but the Hornets didn’t have enough depth behind them in a big meet where you could notch a point with a 12th-place finish.

Huffman,  a senior, and Morris, a freshman, did all it was possible to do, winning two individual events and two relays. They were undefeated.

“I wanted to take it out strong and try to win everything,” Huffman said.

Huffman, who also competes in cross country and soccer for the Hornets, has been a sprinter throughout her swimming career and won the 100 free, as expected.

But she also won the grueling 500, an event she was competing in for the first time in a meet.

“I practiced the 500 for the first time the other day,” Huffman said. “It worked out well.”

But swim math worked against the Hornets.

First place in an individual event was worth 16 points.

In the 200 freestyle, for instance, Burton won, but her 16 points were exceeded by the combination of South’s Audrey Rockstad and Caroline Barbee. They racked up 19 points for fifth and sixth.

Finishing third and ninth netted 16 points. So did finishing sixth and seventh.

Credit South with getting kids out for the team and having the numbers at a time when COVID has reduced rosters from where they were two years ago.

“We do have a lot of returners and a lot of numbers,” said South girls coach Leslie Franks. “We showed up today and we competed. We had a lot of PRs.”

West got a win in the 100 breaststroke from Anna Grace Blackledge. Maggy Moore took second in the 200 free, and the Falcons were runner-up in the 200 free relay.

East’s best showing was a second place by Sydney Steelman in the 50 free.

Carson got seconds from Savannah Hart in the 100 backstroke and Ashlyn Coffer in the 500 free.

But at the end of the day, the Raiders left the pool with the biggest smiles.

“We’re in a conference now where it’s going to be tough for us to compete against the top teams,” Franks said. “So the county has been the goal we’ve talked about all season. Winning the county means so much to the team and the community.”