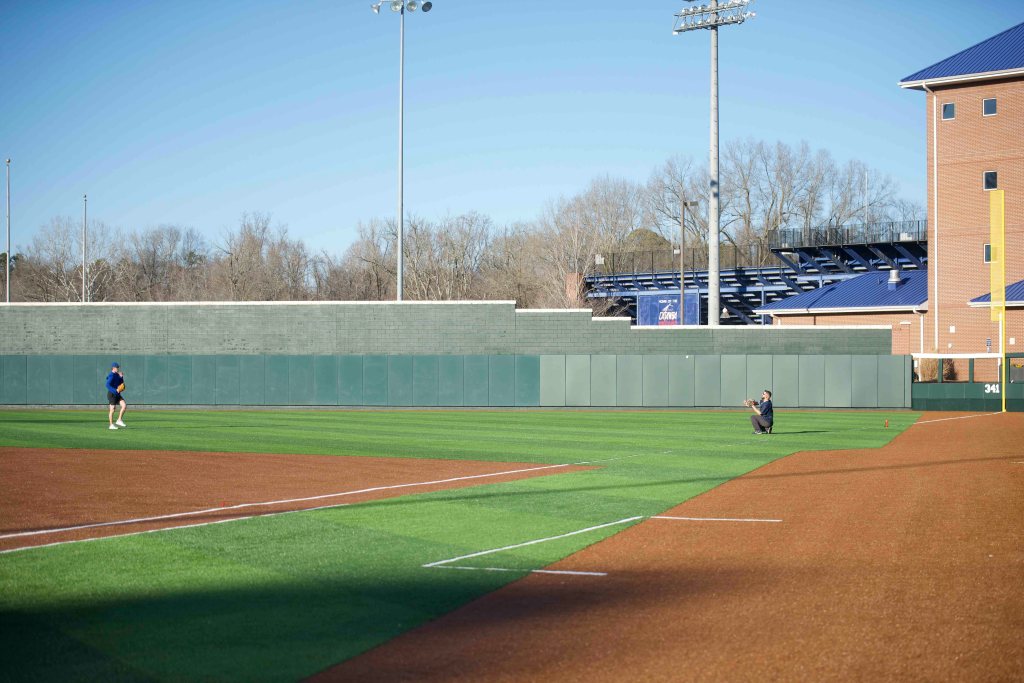 Carl Blankenship/Salisbury Post - Gantt said the team loves spending time on the new field. It is also lower maintenance than the grass and clay surfaces.

SALISBURY — Catawba baseball players can’t help themselves: they want to spend time on their new field.

In 2020, Catawba began a journey to revitalize Newman Park — a move that was decades in the making. Now, the college is wrapping up phase one of a project that has refitted the historic ballpark with space-age turf and spacious dugouts.

The last piece of the first phase is new lighting, which will be installed by Feb. 11 ahead of the team’s debut game at the new field on Feb. 12.

Gantt said the field and dugouts are first-class.

“The term I use is awesome,” Gantt said.

From afar, the field looks like a traditional baseball diamond, complete with neat rows “mowed” into the turf as well as dirt tracks, but on closer inspection the dirt portions of the field are turf, too. These are not just color differences. The green turf is the same material some Major League teams use and processed from coconut fiber. The dirt area is walnut shell.

Gantt said the brown turf has been made and tested to feel like the dirt on a Major League field. It looks like turf up close, but walking on it is uncanny because gives and moves like ball field dirt.

Gantt said some people were upset about the new materials, but they changed their tune took after taking a look at the field.

The turf comes with some advantages. The green turf has to be maintained with brushing and leveling, but it is expected to last about a decade and and it will no longer be washed out by rain. The walnut shell portions are repaired with a mixture of sand and walnut shell.

Catawba Vice President of Development Meg Dees said she was amazed to stand on the field on Monday see it is designed to drain off.

During construction, Gantt said, it looked like the college was building a field in a war zone, but people have been shocked to see the final result. It is a recruitment tool as well.

“A lot of the kids now are growing up playing on turf,” Gantt said, adding that they are surprised to visit the field and see what it is like to not play on rubber.

The dugouts are a big upgrade as well. They are wide open, tall, have plenty of places to sit and their own bathrooms.

The college also installed temporary bleachers. The old grandstand was knocked down during construction. Some fixed, permanent seating will be sticking around and a new grandstand will be part of phase two.

All the phase one upgrades come with a $4 million price tag. Dees said next phase will carry a cost of $8 million with the goal to include the new grandstand, a new clubhouse, restrooms, a concessions building and press box. However, she said, nothing in the second phase has been finalized.

The second phase will improve the fan experience. For example, the college will have to bring in temporary bathrooms for fans for the moment.

The new facility also means more to the community than just Catawba’s team. Local American Legion baseball historically has been played at Catawba, and it will be coming home this summer.

Gantt said the college wants to host tournaments and scrimmages as well.

The college’s First Pitch fundraiser for future construction will be held on Feb. 12. It was supposed to happen in January, but it was postponed due to weather. Dees said that change has probably worked out better because it gives people the chance to go to the first game as well.