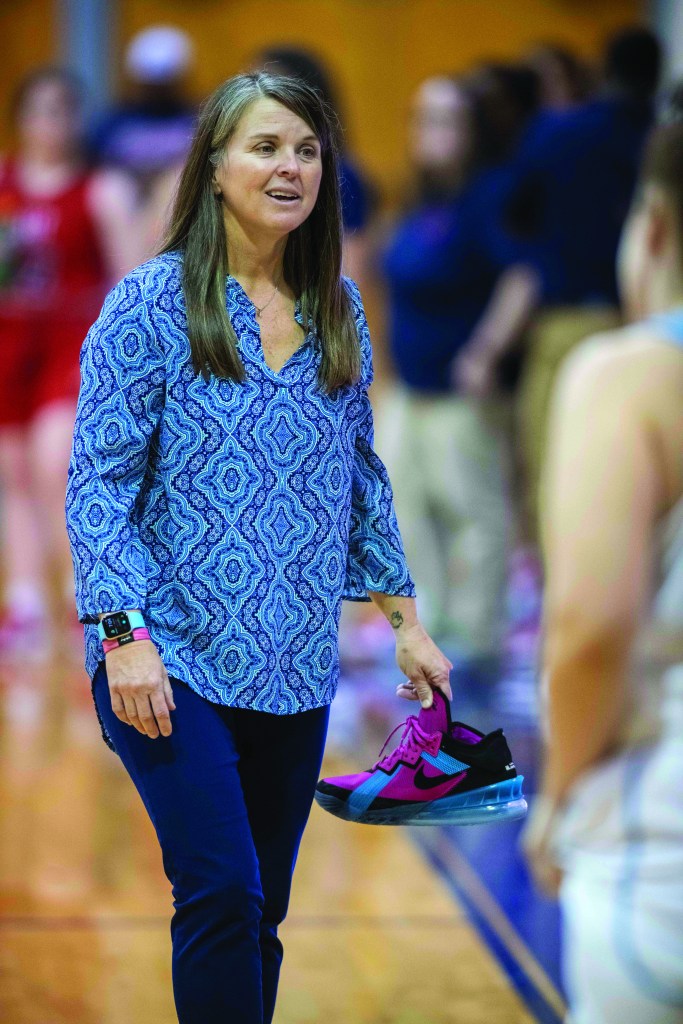 Coach Ashley Poole picks up one of her players shoes that came off during the game. Fourth seed West Rowan high school girls team defeated the fifth seed East Rowan team in the opening round of the Sam Moir Christmas Classic . JON C LAKEY / FOR THE SALISBURY POST. 12/28/21, Salisbury,NC.

The Falcons, coached by Ashley Poole, took control of a South Piedmont Conference game with a dominating second quarter and beat South Rowan 74-55.

West’s exciting sophomore group accounted for 72 of the 74 points.

West has won eight straight against the Raiders. South’s most recent victory came in the 2016-17 season.

Phifer has seven games in the 20s this season. She had set previous career highs this season of 24, then 25, then 26.

Phifer has averaged 26.5 points against South. She had 24 when the Falcons won 70-50  at South in December.

Phifer had plenty of help Tuesday as Lauren Arnold and Emma Clarke scored 16 each.

Arnold has scored in double figures in 12 of the Falcons’ 13 games.

Clarke has surged lately and has put two straight 16s in the books.

South scored 22 in the fourth quarter to make the final score closer.

For South, senior Bethany Rymer lit it up again, scoring 29 points to match her career high.

She’s scored in the 20s 10 times this season, including four games in a row.

“This was a rough one, but we’re learning,” South head coach Alex Allen said. “We’ve got to be more consistent on defense and in boxing out, and we’ve got to finish those easy shots.”

West is scheduled to play Thursday, Friday and Saturday. The Falcons should pick up a breezy win at Concord Thursday. Then they’ll have two of their biggest games of the season back-to-back, rematches with Northwest Cabarrus (road) Friday and Carson (home) Saturday afternoon.

South is at Central Cabarrus on Friday. South edged the Vikings at home.