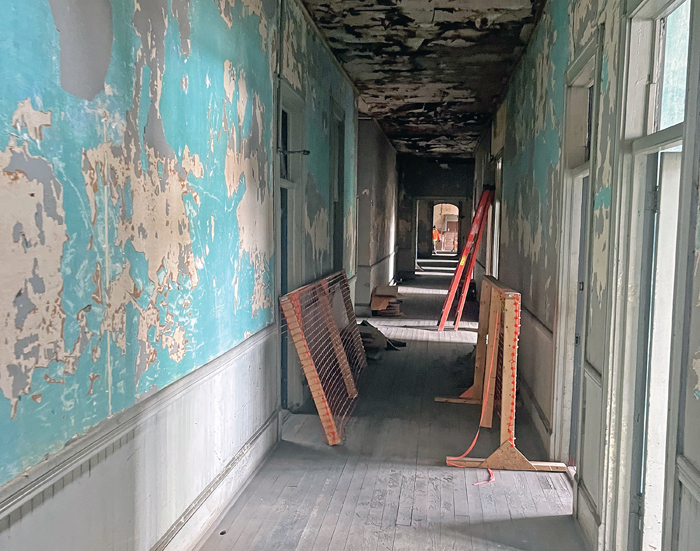 Submitted — In recent weeks, crews have been in and out of the Empire Hotel located at 212 South Main St. to clear out fallen plaster and debris that has accumulated over the years. It's among the first steps needed to tackle the multi-year redevelopment project.

SALISBURY — After months of competing against one another for the opportunity to tackle the Empire Hotel redevelopment project, Charlotte-based developer Brett Krueger has joined forces with local developer Josh Barnhardt to carry out plans for a boutique-style luxury hotel.

The city selected Krueger for the project in September after a Downtown Salisbury Inc. task force spent a year deliberating various proposals and designs for the historic hotel. Months before the selection, the proposals had been narrowed down to Krueger’s concept plan and a similar concept from Barnhardt, who co-owns Barnhardt Jewelers. Last week, the city signed off on a memo for exclusive negotiations with Krueger and his development team.

In 2020, Barnhardt, of Iron Horse Development, renovated space downtown before relocating his family’s jewelry business to its current location at 112 E. Innes St., with two apartments on the upper floor. He’s since been renovating “The Salisbury” building at 121 W. Council St. to transform it into an apartment building with 12 units and climate-controlled storage space. He’s also an investor in the Grants Landing housing development on Rowan Mill Road and is working on another project in downtown Concord.

Krueger said he talked with Barnhardt about the Empire Hotel project and admired Barnhardt’s local connections and ties to Salisbury. Krueger said Barnhardt helped introduce him to community members who have been supportive of the project. The two complement each other in terms of strengths and weaknesses, he added.

“It (feels) great to partner and work together on this,” Barnhardt said. “We’re full steam ahead.”

While both Krueger’s and Barnhardt’s proposals were similar and included a blend of residential and retail space, they included some key differences. The two have worked alongside local architect Pete Bogle to flesh out the concept and design plans and found a way to incorporate pieces from each proposal. The new plan will include Barnhardt’s idea of “row homes,” which look like walk-up townhomes seen in other historic locations.

Krueger said about 8,000 square feet will be dedicated to residential units while another 5,000 will be used for retail space. The plan is to construct around 40 apartments, 26 hotel rooms, five row homes, a spa and a restaurant with a bar. Krueger said the Montgomery Ward space will be transformed into a classy steakhouse restaurant with a bar that complements the boutique, luxury feel, in addition to retail space featuring luxury items from around the world and space for the arts that “bring a feel of Salisbury.”

Some of the apartments will eventually be reserved for Airbnb and vacation rentals with options for 12-month stays.

Krueger said in addition to selling the hotel the goal is to sell Salisbury because “that’s what gets people to come in and stay a weekend.”

In the previous few weeks, light demolition has taken place to get the interior “broom clean,” Barnhardt said. Work included ridding the space of fallen plaster and debris. During those cleanup sessions, Krueger said the team discovered some exposed tin ceilings that potentially date back to 1855.

Surprises and new discoveries are common with such projects, Barnhardt said, and even more so since the hotel has been vacant for decades.

The second phase of cleanup will require a demolition permit to expose ceilings of the ballroom and remove apartments that had been constructed in the 1940s following World War II.

While it’s estimated construction will take about two years, Barnhardt said a lot of due diligence and work must be done before they reach that stage. The hotel’s location is in an opportunity zone and it has been listed on the National Register of Historic Places as part of the Salisbury Historic District. Krueger said his team is working to secure historic tax credits before raising private funds for the project. Additionally, developers will seek a loan to carry out the project. While the full scope of local investment that’s needed is not yet known, Krueger said his team has budgeted about $20 million to carry out the project based on the current market.

“These things never go as fast as you want them to,” Barnhardt said, adding that historic structures of this size tend to involve several unknowns and surprises.

Krueger said Salisbury was never initially on his radar, but all the support from city and county leaders and other local stakeholders sold him and he’s happy to take on this project.

“No matter what, we will get this Empire done,” Krueger said.

Barnhardt added that the ultimate goal is “a great win for Salisbury.”

“We feel really strongly that this can happen,” Barnhardt said.