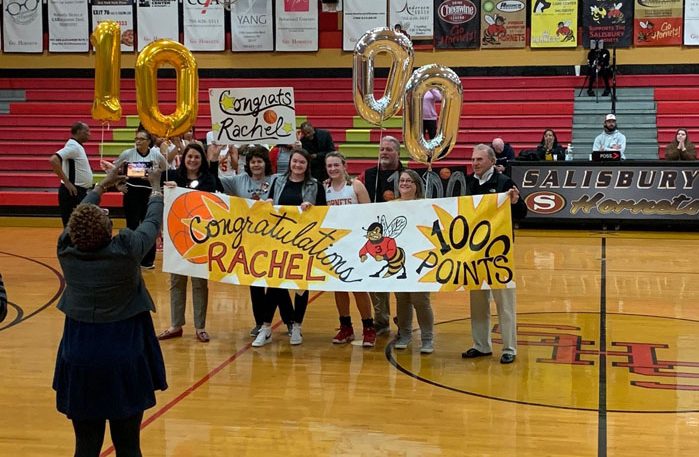 SALISBURY — Salisbury senior guard Rachel McCullough’s family and friends arrived at the gym armed with banners and balloons, and she didn’t disappoint.

The signs and balloons got to be unfurled earlier than anyone dreamed in a 75-9 romp against overmatched Central Carolina Conference opponent West Davidson.

There can be considerable anxiety about reaching 1,000 career points, but McCullough, who needed 18 when Tuesday’s home game with the Green Dragons tipped off, experienced only a limited amount of nervous tension. She was so jacked up she fired one 3-pointer five feet over the rim for a colossal airball, but overall she may have played the best 12 minutes of her life.

With a flurry of layups, some easy, some spinning, some amazing, she got to the milestone in a hurry — with 3:41 still remaining in the second quarter.

Those in-traffic layups showed how far she’s come as a basketball player. She shook off the “shooter” label a couple of years ago.

“Rachel is a gamer who doesn’t get nervous,” Salisbury head coach Lakai Brice said. “She controlled her nerves in a very special game for her, and her teammates were there for her. They were aware of how many points she needed and they really wanted her to do this at home. They got her going. They were always looking for her — and they were finding her.”

For McCullough, 1,000 points was a dream that began on the night of Nov. 30, 2018, when she scored a handful of points at Thomasville as a varsity freshman.

Late in the pursuit of 1,000, the weather got involved, postponing the Thomasville game that was scheduled for Friday and canceling the West Rowan game that was set for Saturday.

“We found out Thursday at practice we wouldn’t be able to play, and the weekend was just really boring,” McCullough said. “I was kind of hoping to get to 1,000 against West Rowan because I wanted that competition, but I’m happy. I think we’ve had five or six games this year that we haven’t been able to play, but I reached a goal.”

She was relieved that she didn’t fall on the ice or sprain an ankle walking down the stairs.

She started the scoring Wednesday with a 3-pointer from the right side, from well behind the bonus line that was the key to her long march to 1,000.

With three layups in the scorebook, one of them a whirling three-point play, she had 10 points after the first quarter.

Her next nine came in a flash, mostly in the paint. She got to 1,000 on the layup part of a three-point play, and her teammates poured off the bench and on to the floor to congratulate her.

“I usually score 14 or 15 in a game,” McCullough said. “I don’t think I’ve ever scored 19 in a half, but I just went out and played, tried not to overthink anything, and my teammates got me the ball.”

Officials assessed a technical foul on the Hornets when they charged the floor, but no technical has ever been more cheerfully received by a coaching staff.

After the commotion died down, McCullough calmly made her free throw for 1,001. Then West Davidson (3-11, 1-3) made a technical free throw.

Then the action was stopped for a few minutes for photo ops and smiles and to hand McCullough a commemorative ball at midcourt.

“I remember when (former Hornet) Anayia Fulson needed 13 points for 1,000 the first game of the (2019-20) season,” said Salisbury junior guard Kyla Bryant, who scored 17. “Anayia was shaking and really anxious about it, but she got the 13. This night was a lot easier.”

Bryant’s own 1,000-point night should come later this season. She’s already been able to experience two of them with teammates, so she’ll no doubt stay calm.

The deep Hornets (13-1, 5-0) had not played since Jan. 15, but they didn’t look rusty after the first few possessions. McCullough’s early spree lifted the Hornets to a 21-3 lead after a quarter.

It was 49-6 by halftime, a massive lead that meant a running clock for the entire second half.

“We were pretty good even after so much time between games because we have so much competition in practice and can really push each other,” Bryant said. “Our defensive intensity stayed high no matter what the score was.”

Lots of Hornets had their moments. Jaleiah Gibson made a jump hook. MaKayla Noble drove 50 feet for a layup and made a powerful finish. Haley Dalton swished free throws. Jamecia Huntley doesn’t shoot much when the Hornets are crushing someone, but she got the last two with a nice move in the lane.

“It was really disappointing not getting to play the Christmas tournament championship game,” McCullough said. “But we’ve moved on from it, and we’re getting better.”

Ranked second in 2A West, the Hornets will play at South Davidson on Friday.