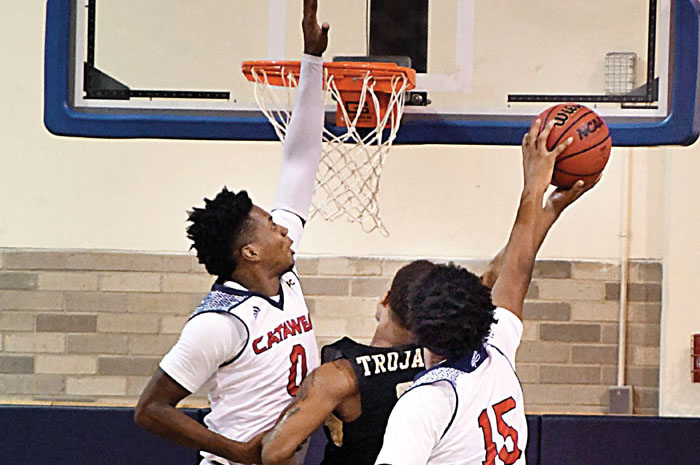 Catawba’s Bernard Pelote (15) blocks a shot with Ace Carter’s (0) help during a game against Anderson last season. Pelote scored 22 points against Coker on Monday night. Photo by Wayne Hinshaw, for the Salisbury Post

Catawba enjoyed a blistering start at Coker’s DeLoach Center with seven made 3-pointers in the first 10 minutes.

The Cobras never recovered from that early onslaught. The Indians romped 80-58.

Lamar had team highs of five assists and three steals.

There was some concern that the Indians might have a letdown in a quick-turnaround makeup game following Saturday’s upset of 10th-ranked Lincoln Memorial.

But that wasn’t the case.

The Indians finished strong, outscoring the Cobras 22-9 down the stretch.

Catawba is back at it on Wednesday night at home against Limestone. Catawba won in two overtimes at Limestone on Dec. 8.