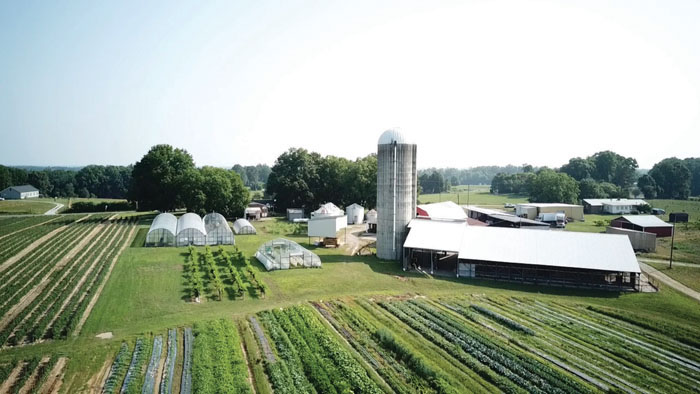 Submitted photo The Correll family farm in Woodleaf has been around for more than 140 years.

SALISBURY — Carrie Barnhardt was a sophomore at North Carolina State University in 2009 when her family was forced to sell their milking cows and leave the dairy business.

“It was devastating,” Barnhardt said. “I’m not going to sugar coat it. We went from my dad having a full-time job being in the dairy industry to him not making any money on the farm for five years in a row.”

Barnhardt’s family was one of many forced out of the industry when the economic recession caused milk prices to plummet.

“Back in that time frame, if we would sell a gallon of milk, if you would buy it at the grocery store for, let’s say, $1.20, we were only making maybe 10 cents on that gallon of milk,” Barnhardt said. “When the market crashed, it sometimes even got down to the negative where we were giving our milk for free.”

Despite watching her family give up their herd, Barnhardt forged a path in agriculture and now operates a farm in southern Rowan County with her husband, Adam. Her family’s experience steered Barnhardt away from cows. In its fourth year of commercial poultry farming, Barnhardt Farms produces about 7 million eggs per year.

Barnhardt’s story of resilience is not uncommon among farmers in Rowan County. Through economic recessions, societal changes and developmental pressures, Rowan County farmers have persisted. The county has nearly the same number of farms today as it did in 1982, according to agriculture census data collected in 2017 and published in late 2019.

“That was surprising to me because I would’ve expected a huge shift,” said Amy-Lynn Albertson, Rowan County Cooperative Extension director. “To me, in one way that says a lot about the perseverance and significance of agriculture in this county and how embedded it is.”

Rowan County is home to 925 farms, compared to 956 in 1982. The average farm size is 129 acres, and 97% are family-owned and operated. A total of 118,914 acres is farmland. There are more farms in Rowan County now than there were in 1992, when there were just 751 farmers and a total acreage of farmland slipped to 104,874. Agriculture also is still a major industry for the county, contributing $82 million to the local economy annually. And Albertson is quick to point out that working farmland doesn’t cost the county any money to maintain.

While agricultural acreage and number of farms has not fluctuated much over the past four decades, farming operations in Rowan County have shifted dramatically. Corn, soybeans and wheat have largely replaced cotton, which was at one time a prevalent crop needed to support the local textile industry. Dairy used to be a major agricultural product, but now there are only eight operations remaining in the county.

Like Barnhardt, David Correll watched his family’s multi-generation farm transition out of the dairy business.

“In 2005, we made the really tough decision to exit the dairy business,” Correll said. “We sold our cow herd at that time. Looking at economics, the dairy part was going through some really challenging times, which continues today for the folks who are still in the dairy industry.”

With help from his wife, two kids and uncle, Correll now grows more than 100 varieties of fruits and vegetables, ranging from lettuce and other hearty greens to melons and tomatoes. Also like Barnhardt, Correll comes from a long line of farmers. He’s the fifth generation to farm the same land in Woodleaf that his ancestors started farming more than 140 years ago.

“There’s a real sense of pride to continue the family operation and continue to work this land we’ve had for a long time,” Correll said.

Plenty of farms in Rowan County have been around for decades or centuries, passed down from parents to their children like heirlooms.

“There are a lot of families who have been here for a long time and the land stays within those families and they continue to farm generation to generation,” Albertson said.

Rowan County’s rich farming heritage has remained strong, but farmers are facing just as many challenges today as they ever have.

The 1980s were notoriously tough on the agricultural community.

“The ’80s are always talked about as some of the hardest times to farm,” Albertson said. “A lot of famers lost everything in the ’80s.”

A country-wide economic recession combined with inflation and plummeting prices to deliver a devastating blow to many farm families. Some of those same factors, Albertson said, have once again emerged.

The annual inflation rate in the U.S. reached 7% in December, the highest it’s been since 1982. For most Americans, that means higher prices at the checkout counter. For farmers, that means exorbitant input costs. Inputs are anything from fertilizer to seeds to livestock feed and are necessary for farmers to grow a successful crop or raise a robust herd of cattle.

Higher input costs typically lead to smaller margins for farmers who already don’t have much room between profitability and financial hardship.

Stephanie Frisbee has seen those effects firsthand on Hopeful Acres, the farm she owns and operates with her brother, Chris Morgan. The southern Rowan County farm specializes in beef production, but also grows a variety of crops.

The rising costs of inputs is a burden felt disproportionately by smaller-scale farmers.

“Profitability becomes based on size a lot of times,” Correll said. “The larger the operator, the cheaper they can buy the inputs and the bigger equipment they can have to cover more ground at one time.” 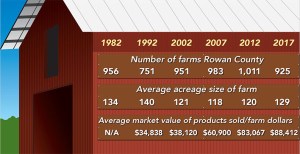 During the pandemic, Barnhardt Farms implemented an egg-plucking robot that has significantly reduced the need for human labor. Even with the robot’s help, the farm has still been seeking to fill open positions since May, but it has not been successful.

Pressure from development is mounting, too. Rowan County’s population has grown from 111,000 in 1992 to 142,000 — a 31,000-person increase. New housing developments have sprung up across the county and the southern end of Rowan is starting to feel Charlotte’s encroachment. The county has also seen an increase in economic growth in recent years, landing major projects like the Chewy fulfillment center with the potential for even bigger projects in the future.

“When you talk to farmers, especially in the western part of the county, they’re extremely concerned about the rate of residential development that’s happening in their area,” Albertson said. “There are a lot of housing developments going up very quickly and a lot of farmland is going away.”

The consequences of more development and less farmland are clear to Albertson.

“That means we have less green space, that means we have more people to feed, we have more infrastructure we have to provide for, more schools, more roads, more water, more sewer, more fire departments, more police, more all of those things that are needed to take care of all the people,” Albertson said. “And then, there’s less rural landscape and that means there’s less land for people to try to farm to make it profitable.”

The higher value of land might encourage some farmers to sell, especially when future profitability is in question.

“Sometimes it’s an offer they can’t refuse,” Albertson said. “Especially when they don’t have anyone in the family who doesn’t want to take over the business. When that is the case, it makes it that much harder to refuse those kinds of offers.”

For novice farmers attempting to break into the business, not inheriting land from family can be a barrier too high to breach.

“A young, beginning small farmer might not be able to afford property when there’s another offer on the table from a developer that’s six times as much as what that young farmer can offer” Barnhardt said.

Local farmers already have started to develop solutions to some of today’s challenges. Diversifying the crops and livestock they grow and sell is chief among those strategies. Along with produce, Correll farms raises chickens and a small herd of beef cattle.

“That’s how we’re trying to combat the change is through diversification and adding new things,” Correll said.

Frisbee has followed a similar path at Hopeful Acres. To complement the farm’s cattle operation, she started to grow cut flowers in 2016 and coined the tagline “beef and blossoms.” The business, she said, already become a successful enterprise. Barnhardt, too, has gotten into the cut flower game and now uses the farm’s nutrient-rich chicken manure to grow beautiful blooms.

“A lot of that is stemming from my history on the dairy,” Barnhardt said. “That is all we did. We did the dairy farm and we didn’t do anything else. When the dairy was bad, we didn’t have anything else to help generate income to float it. While we do very well on the poultry side, overall it’s just the smartest business decision any business can do is to generate other revenue streams to help alleviate some dips in the market.”

Another way to maintain profitability is by selling directly to consumers. Hopeful Acres does that by setting up a booth at farmers markets and selling in local stores. Correll Farms has a booth at both the Salisbury Farmers Market and the market in Davidson County, but it also has a home delivery program that gives customers in Rowan and neighboring counties the option to order a weekly basket of fresh produce.

Even with those strategies in place, the future of agriculture in Rowan County is uncertain. To ensure that farmland is around for years to come, Albertson said the county must come up with a plan.

A roadmap for the future

Unlike all of its neighboring counties, Rowan County currently lacks a plan on how to protect and preserve farmland for the future. The Rowan County Agricultural Advisory Board and Cooperative Extension are working to change that.

The board applied for a grant to help write the plan in 2019 and was awarded funding in 2020. With consultation from the University of Mount Olive, the board is now in the process of formulating a plan designed to help Rowan develop “industrially, residentially, and economically while supporting working farmlands and promoting a robust agricultural community.”

The board is currently surveying people who live in the county, including people in agriculture, people in agri-business and non-farm residents. Once that survey is complete, the board will take data and start to iron out details of the plan. Albertson said the goal is to be able to present a “Working Ag Lands Plan” in September.

Farmers are optimistic about what the plan could accomplish.

“I really hope that when it’s finalized, the (Rowan County Board of Commissioners) will support that and then we will be able to use that as a document to help support farmers and possibly see the growth of agriculture,” Frisbee said.

When thinking about the future of agriculture in Rowan County, Barnhardt thinks back to a lesson she learned from her grandfather.

“My grandfather always said, ‘God’s not making anymore land,’” Barnhardt said. “Once we develop it, we can hardly ever get it back into farmland. People have to eat and we have to provide them food somehow and we need land to do that. I think there’s a good interest here, it’s just making sure we preserve what we have to keep it available for the next generations.”

The current Working Ag Lands Plan survey can be completed online at go.ncsu.edu/rowanworkingaglands, by mail, or people can visit the Cooperative Extension office at 2727 Old Concord Road and fill one out in person. Albertson encourages everyone, not just farmers, to take the survey. For questions or comments, call 704-216-8970 for more information.

RSS administrators will recommend mandatory masks due to omicron…