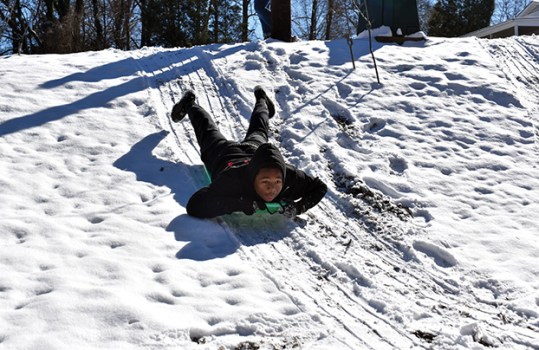 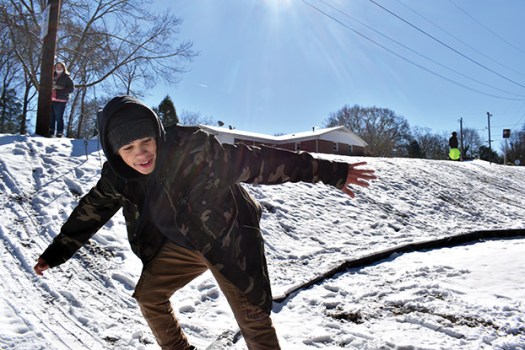 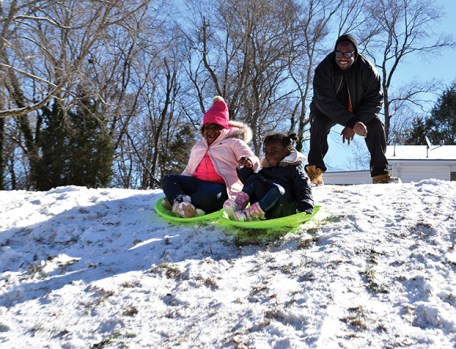 Tim Mapp watchs as his daughters descend the slope together. Ben Stansell/Salisbury Post 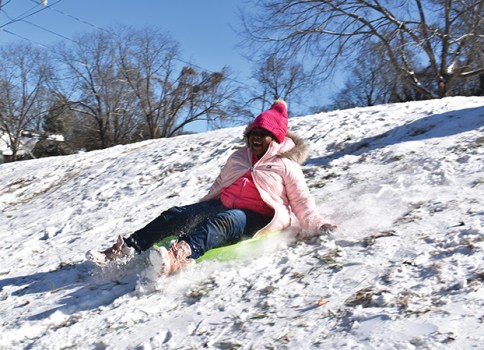 Koren Mapp kicks up powder while sledding down a hill at Centennial Park. Ben Stansell/Salisbury Post

SALISBURY — Koren and Milli Mapp clasped hands and let out a shriek of excitement as their father Tim pushed them down the gentle snowy slope at Centennial Park in the Fulton Heights neighborhood.

The family was taking advantage of the white powder draped over Salisbury on Friday night. The winter storm brought as much as two and a half inches of snow to parts of Rowan County, with the Faith area likely seeing the most accumulation.

Snow started falling in the southwestern part of the county around 6:30 p.m on Friday. An hour and a half later, the entire county was seeing white. The snowfall started to taper off around midnight and finished for most of the county before 1 a.m. as temperatures got as low as 16 degrees in some areas of the county overnight.

Saturday morning was the second time in a week that Rowan Countians woke up to find their homes, yards and cars covered in white. The last time the county experienced snow accumulation twice in a week was in January 2016, when there was a trace of snow on Sunday, Jan. 17, 2016, and then two inches of snowfall on Friday, Jan. 22, 2016, said Steve Monday of Rowan County Weather.

“It’s pretty rare to get two snowfalls in the span of a week, certainly,” Monday said.

This weekend’s snowfall was considerably less icy and more powdery than last weekend’s precipitation, and there wasn’t any sleet accompanying the fall.

“We had some drier air that moved in above our heads and helped make the snow more powdery and fine as it came down,” Monday said.

The snow was ideal for building a snowman, forming a ball for a playful fight or sledding. Mapp and his daughters weren’t alone at Centennial park. Other parents pushed delighted children down the hill and teenagers showed off their boarding skills while riding solo.

Both state and local crews were out clearing roads on Saturday morning, causing Gov. Roy Cooper to issue a statement encouraging North Carolinians to stay home if possible. For those traveling, the N.C. Highway Patrol advised drivers to reduce speed and keep distance from one another.

By the time plows started to clear streets around noon on Saturday, the bright sun and higher temperatures began to melt much of the snowfall.

Rowan County Emergency Services Lt. Johnny Webb said the 911 division did not receive an increased number of calls due to road conditions or the weather on Saturday. He attributed that largely to the quickness with which the snow melted. However, Webb said encouraged caution on the roads overnight on Saturday and into Sunday morning as freezing temperatures could cause roads to ice over.