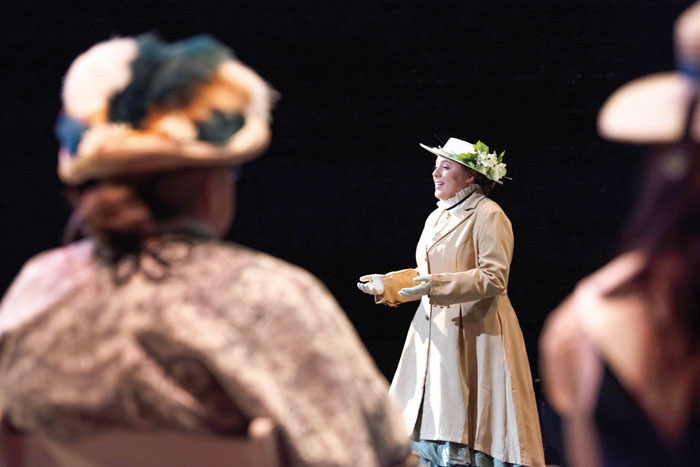 Abby Skibsted as Mrs. Webb at the wedding

“Our Town” is your town.

Although Wilder set his story in the fictional American small town of Grover’s Corner between 1901 and 1913, it could just as easily be Salisbury, North Carolina. In fact, Lee Street’s production is supplemented with authentic photographs of old Salisbury.

The residents are universal. These people could have lived in any small American hamlet, including Salisbury. The audience will identify with every character.

Fellow cast members say, “Linda Jones is magnificent as our omniscient narrator.” “The stage manager is unique in American theatre. Linda has the ability to slip in and out of the action of the play, without disrupting the plot.”

Mark Curran, making his LST debut, portrays Doc Gibbs, the patriarch of the prominent Gibbs family. He is the only doctor in town and is well known to all. Curran returns to the stage for the first time in 35 years, last appearing in “The Lion in Winter.”

Evynn Grignon is Emily Webb, an intelligent woman with a heart of gold. We follow Emily from a precocious young girl through her wedding to George Gibbs. Evynn has appeared at LST in “Willy Wonka Jr.,” and “A Christmas Carol.”

Julia Gibbs, wife of Doc Gibbs, is played by Nancy Gaines, who appeared in the LST production of “Steel Magnolias.” Nancy has also shown her talents as costumer of numerous Lee Street shows.

Audiences will see Josh Doyle as George Gibbs, son of Doc and Julia, a boy-next-door type. He’s a kind but irresponsible teenager who matures over time and becomes a responsible husband and father. Doyle was seen as Eugene in LST’s summer production of “Grease.”

A character everyone certainly knows, Mrs. Louella Soames, is depicted by Beth Bentley. Soames is a gossipy townswoman and member of the church choir. “The way Beth plays Mrs. Soames makes me laugh every time I see her,” says a cast member. Beth’s credits at LST are lengthy: “Shipwrecked!” “Rocky Horror Picture Show,” Pride and Prejudice,” “Shiloh Rules,” “Deathtrap,” “Curious Incident of the Dog in the Nighttime,” “9 to 5: the Musical,” “Clue” and “Willy Wonka Jr.” Like Gaines, Beth is a brilliant costumer and has designed numerous LST productions, including “Our Town.”

Others in the cast are Quinn Grant, Thomas Gushlaw, Abby Skibsted, Maryella Rosko, Hunter Safrit and Maxwell Greger, with some of the cast playing multiple roles.

First produced in Princeton, New Jersey, in 1938, “Our Town” later went to Broadway and won the Pulitzer Prize for Drama. It has become legendary in American live theater.

Why has “Our Town” endured as the treasure it is?

LST cast members say, “…due to its portrayal of human relationships.” It tells us “in order to appreciate our lives, we must realize life while we have it…every, every minute.” “Regardless of the year, you can connect your life to “Our Town” in some way, shape or form.” “Because it speaks simple truths…words to consider in your own life…and it does so, brilliantly.”

“Our Town” is directed by Ryan Miles, stage managed by Mackenzie Rosko, production design by Rod Oden and costume designed by Beth Bentley.

Lee Street theatre’s production of  “Our Town” runs Fridays and Saturdays, Jan. 28-Feb. 5 at 7:30 p.m. Tickets are available at leestreet.org.