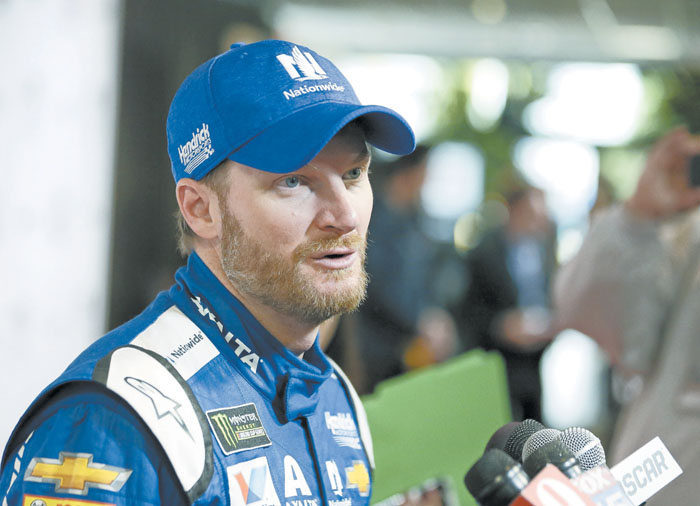 CHARLOTTE (AP) — Dale Earnhardt Jr. was voted NASCAR’s most popular driver a record 15 times.
He didn’t forget “Junior Nation” on his way into the Hall of Fame.

“When I stumbled, you guys were right there ready to lift me back up,” Earnhardt said to his fans. “There were times when I absolutely needed you — and you never let me down. We won together, and we lost together. … You should know that I don’t go into this Hall of Fame alone. I go in with you, and I go in because of you.”

Earnhardt was inducted into NASCAR’s 12th Hall of Fame class on Friday night along with late-model driver Red Farmer and the late Mike Stefanik, a decorated modified driver who died in a plane crash in 2019. Ralph Seagraves was named as the recipient of the Landmark Award for Outstanding Contributions to NASCAR.

The group was selected in 2020, but the induction ceremony was postponed more than a year due to the coronavirus pandemic.

“To join Dad in the Hall of Fame is probably as good as it is ever going to get,” Earnhardt said.

Known around the pits simply as “Junior,” Earnhardt won 26 races during his Cup career, including two Daytona 500s and the 2001 Pepsi 400, which came four months after his father’s death at the same track.

Although Earnhardt never won a championship, his impact has been felt throughout the racing world building a career as NASCAR’s top ambassador while finding a crossover audience that stretched far beyond his father’s reach.

“In the time I have been involved in racing, nobody has impacted the sport more than Dale Earnhardt Jr.,” Hall of Fame driver Jeff Gordon said. “When he won, three-quarters of the grandstand stood up and cheered.”

Earnhardt began his career at family-owned Dale Earnhardt Inc., winning back-to-back Xfinity Series titles and 13 races in two full-time seasons. He won his first Cup Series race in his 12th career start. Like his father, Earnhardt was a master of the draft and thrived in restrictor-plate racing with 10 of his 26 career Cup victories coming at Daytona and Talladega, including Daytona 500 wins in 2004 and 2014.

He left DEI six years after his father’s death and joined Hendrick Motorsports in 2008 as one of the most coveted free agents in the sport.

Car owner Rick Hendrick said he’s been amazed by Earnhardt ever since.

During the recession, Earnhardt approached Hendrick and asked for $1 million to be deducted from his paycheck and distributed among the company’s employees so that “no one would have to suffer.”

When that money wasn’t redistributed right away, Earnhardt marched into the front office at Hendrick Motorsports and insisted upon it.

“He has an unbelievable heart,” Hendrick said.

“I don’t know of anybody in any sport that has represented his family any better,” Hall of Fame driver Richard Petty said.

Earnhardt was inducted by his wife, Amy.

“He gives of himself daily and loves his family dearly,” she said.

Farmer was inducted by Hall of Famer Tony Stewart.

Farmer’s exact win total during his career is unknown, but it is “somewhere north of 700” according to the NASCAR Hall of Fame.

A member of the “Alabama Gang,” Farmer won NASCAR’s Modified Division championship in 1956 followed by three consecutive championships in the Late Model Sportsman Division from 1969-71. Farmer preferred racing late models, but did run 36 Cup Series races with a best finish being a fourth place.

Farmer has lived a charmed life — surviving a helicopter crash that killed racecar driver Davey Allison, a tornado that struck and damaged his car and trailer and a bout with COVID-19.

Through it all, he continues to drive on short tracks at age 89.

“It’s something that gets in your blood and you can’t get it out,” said Farmer, who said he can’t wait to drive on Talladega’s short track just days after dealing with a heart issue. “I haven’t gotten it out of my blood in 75 years. … I have had a great life and I wouldn’t trade anything for it.”

Farmer is the first driver to be inducted in on the “pioneer” ballot, which recognizes drivers whose careers began prior to 1962.

Stefanik won nine all-time NASCAR championships — tied with Richie Evans for the most ever.

He won seven titles in the NASCAR Whelen Modified Tour and two others in the Busch North Series. Stefanik holds modified series records for championships, wins, poles, and top-five and top-10 finishes. In 2003, he was named one of the tour’s 10 greatest drivers.

Former car owner and crew chief Ray Evernham, a member of the 2018 Hall of Fame class, inducted Stefanik into the Hall. Stefanik’s wife, Julie, accepted the honor on behalf of her husband and said he always respected his competitors.

“He was very methodical about his approach and he was a clean and fair racer,” she said.

Seagraves, who died in 1998, was selected as the recipient of the Landmark Award for Outstanding Contributions to NASCAR. A former official with R.J. Reynolds Tobacco Co., Seagraves helped sponsor the Winston Cup Series, a partnership that helped NASCAR launch into the national spotlight and created a bedrock of stability for three decades.