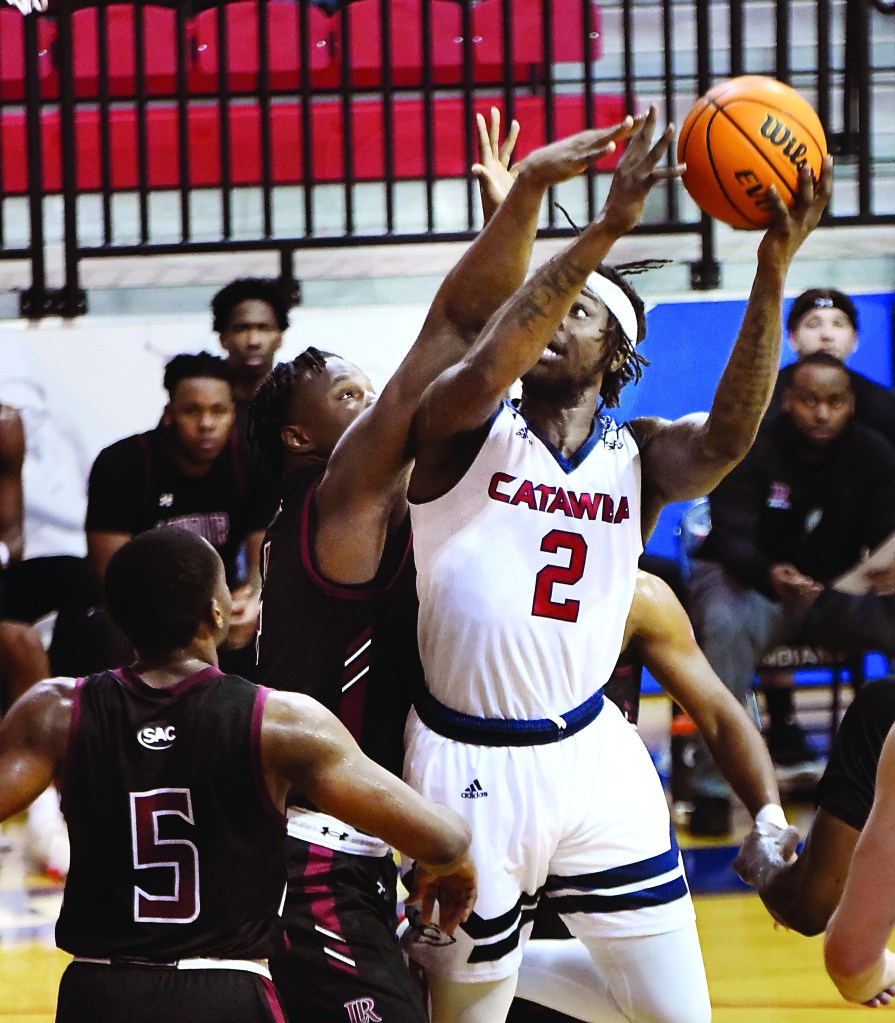 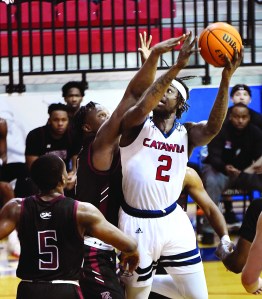 Catawba had lost two in a row, so a victory against the SAC’s toughest bully was unexpected. Lincoln Memorial, which made the long road to trip to Salisbury on Friday, was an 11-point favorite with an 83-percent win probability, according to the Massey Ratings.

“It’s a signature win for us, a win we’ve been knocking on the door for,” Catawba head coach Rob Perron said. “We were able to beat them a few years ago (Jan. 12, 2019), but we had a really special group then. Now we’ve got a bunch of young guys who are working to be another special group. These guys have been through a lot with COVID, but they put in the film study and they are learning. They really want to be good.”

Prior to Saturday, Catawba had lost six straight in the series. High-powered LMU had topped 100 points four times in recent outings against the Indians.

Catawba (7-9, 6-8) had lost at Lincoln Memorial 93-77 in November, although it was more competitive than it sounds.

“We’re down two at their place with 6:45 left, but they had a ridiculous run to finish the game,” Perron said. “They may be more vulnerable than they are some years, but they’re still a formidable team.”

LMU (14-3, 11-3) is perfect at home, but it has been beatable on the road. The Railsplitters also lost at Queens and at Wingate. The SAC is wide open.

The key performer for Catawba was 6-foot-5 guard Trevion Lamar, who averages 14 points. He put up a season-high 28 against the Railsplitters on 10-for-15 shooting, while dishing out six assists.

“They were going under ball screens with him, and he popped some 3-pointers,” Perron said. “He doesn’t always take that shot. A lot of times he prefers to distribute and defers to our other scorers (Caleb Robinson and Bernard Pelote), but tonight he shot with confidence and he had a hot hand.”

Catawba led by 10 points before LMU had an alarming run to close the half. Catawba took a 41-39 lead to the locker room.

Lincoln Memorial kept the heat on the Indians early in the second half, scoring the first five points for a lead change. That was a critical juncture for the Indians. Lamar made two 3-pointers as the Indians stabilized and went back ahead 49-47.

Catawba did a super job on the boards and pushed to a 10-point lead. The Indians peaked on a bomb by Kris Robinson with 8:40 left.

“I was pretty confident then,” Perron said. “We made some shots with some swagger.”

Still, the Railsplitters are who they are for reason. They got all the way back to a four-point deficit before Catawba sealed it. Ben Bowen and Lamar made key free throws at the end.

Catawba had a 10-6 edge in the turnover battle and had 15 offensive rebounds, while limiting the Railsplitters to seven.

Catawba was a terrific 13-for-28 from 3. That helped the Indians make up for dismal 10-for-21 foul shooting.

Caleb Robinson, the SAC’s scoring leader, was held to nine points, but had 11 rebounds for the Indians.

Catawba got an early 3-pointer from Darren Joyner, a member of the developmental team. That energized everyone.

Tied for seventh place with Anderson, Catawba is back in action Monday at Coker.