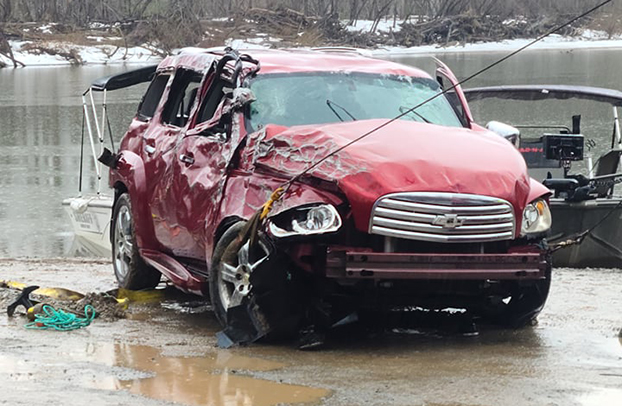 Photo submitted by Anthony Sharum - This vehicle, a Chevrolet HHR, was found at the bottom of the Yadkin River near the U.S. 29 bridge at the Rowan-Davidson county line.

SPENCER — Rescue crews on Thursday dragged an unoccupied vehicle out of the Yadkin River after it was struck by a train several days earlier.

The vehicle, a 2011 Chevrolet HHR, is registered to William Franklin Head, said Trooper N. Moultrie of the N.C. Highway Patrol.

State records show Head is registered to vote in Guilford County, and the Davidson County Sheriff’s Office told the Lexington Dispatch a missing person’s report for him has been filed with Greensboro Police.

Moultrie said it’s possible the vehicle could have been occupied at the time of the collision, but there was no body in it when divers found it or when it was raised it from the bottom of the Yadkin River. Davidson County Sheriff Richie Simmons told the Dispatch deputies are looking for the black box in vehicles to see if someone was in the car when it was struck.

The car was struck around 9 p.m. Jan. 14 when a Norfolk Southern train was traveling into Rowan County on the bridge adjacent to U.S. 29 at the Davidson County line. A burgundy piece of metal was found on the tracks during a search immediately after the crash, but Rowan County firefighters and rescue crews ended the search after several hours without success.

Because the collision happened on the other side of the river, Davidson County took over supervision of the search.

Anthony Sharum, a retired wildlife officer and fisherman who lives in Rowan County, located the vehicle Tuesday using a Garmin Livescope, which helps fishermen see movement or structures underwater. Because of the device’s ability to easily spot things with sonar, Sharum has made a habit of finding vehicles — nine to date. Sharum says all of them have been dumped in the river, except for the vehicle struck a train. Another recent find was reported stolen in Rowan County.

Sharum says he’s just “an old retired guy that keeps his eyes open” and that he’s glad to help where he can.

Already planning to be in the area on Tuesday, Sharum took a detour to the railroad bridge to see if he could find the car. Sure enough, he spotted it within a minute. The vehicle was upside down almost directly underneath the railroad bridge. Sharum said the vehicle sunk straight down after being pushed by the train onto the bridge and then fell into the water.

“It was maybe 80 feet before it fell off into the river,” he said.

On Wednesday, the Rowan County Rescue Squad and Millers Ferry Fire Department went to the scene of the collision, found the vehicle and attached straps to it. On Thursday, crews from Durham County attached floatation bags to the vehicle that created enough lift to allow a boat to drag the car close to the shore and for a tow truck to bring it onto land.

While Sharum’s system is most common among fishermen, he says it could be beneficial for rescue crews, too.