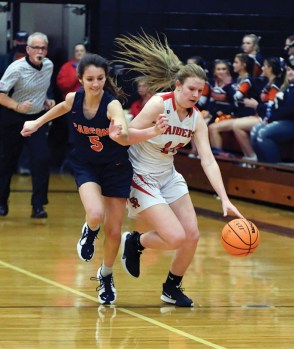 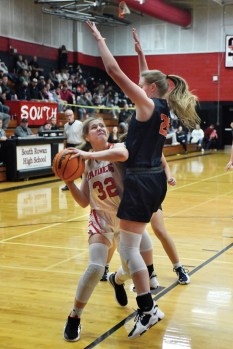 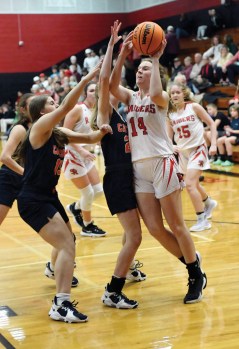 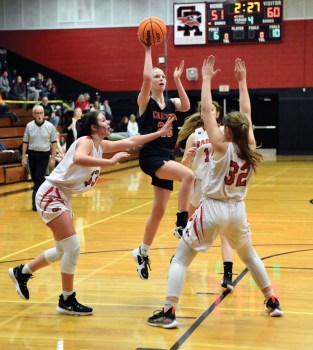 Carson was able to hold on and beat South Rowan 68-56, although a  South Piedmont Conference game that looked like a routine win for the Cougars after three quarters, got interesting down the stretch.

“We played good basketball for three quarters, and it’s a conference road win,” Carson head coach Brooke Stouder said. “But we’ve got to finish games better. I think we relaxed some after we had a big lead. And we need to a better job of adjusting to the way a game is being officiated.”

Carson had a whopping 22 offensive rebounds and 25 free-throw attempts, but shot under 50 percent at the foul line.

The Cougars still equaled their highest offensive production of the season.

“But the opportunities were there for us to score a lot more than we did,” Stouder said. “We didn’t shoot very good percentages and we’ve got to do better on free throws.”

Speaking of  free throws, there were 35 attempted in a fourth quarter that lasted a while. Carson shot 17 free ones in the final quarter, while South shot 18.

Carson senior guard Camden Corley, who is playing a major role for the first time in her career, scored a career-high 17 to lead the Cougars. She shot 8-for-15 from the floor.

“She’s doing a great job of taking what defenses give her,” Stouder said. “We swung the ball well against their zone and she was able to attack. She’s got a nice floater that she’s really worked on. She scored a lot in the lane.”

Makayla Johnson, a senior who is known for softball and is making a basketball comeback after not playing as a junior, had her biggest game of the season with 11 points and 10 rebounds.

Aliayah White added seven for the Cougars (13-3, 6-1), who have won four in a row and reside in first place in the SPC.

Carson led 31-24 at halftime. Pressure defense in the third quarter enabled Carson to open up a 54-32 lead that looked safe, but a lot of it disappeared during South’s 24-point fourth quarter.

South (7-8, 3-4) got 26 points (10 on free throws) from senior Bethany Rymer, who is leading the county in scoring with 19.9 points per game. Rymer is also making a basketball comeback after sitting out her junior season. She is averaging 22.9 points in her last nine outings. She’s had 29, 26 and 26 in her last three.

“They really battled us,” Stouder said. “It would have been easy for them to quit after the third quarter, but they competed to the end.”

Carson won its 14th straight against East Rowan on Wednesday and made it 10 in a row against the Raiders.

Carson had expected to play at West Rowan tonight, but that one already has been postponed due to the weather forecast.