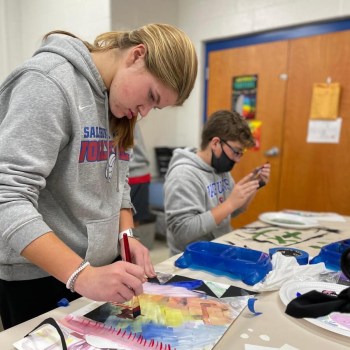 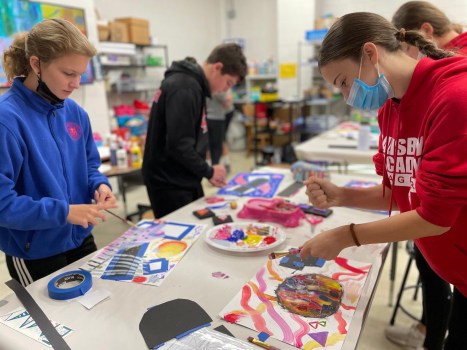 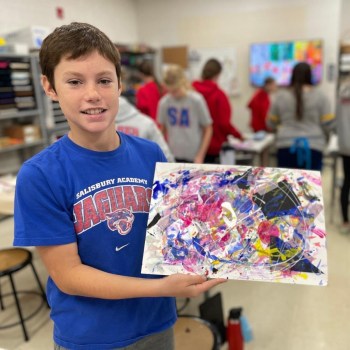 SALISBURY – Abstract expressionism is a long way from its mid-century origins, but Salisbury Academy eighth graders got a taste of the seminal modern art movement during the first week of January.

Salisbury Academy art teacher Shanna Glawson says a lot of people look at abstract art and it confuses them.

“I really thought this was a good opportunity to explain to the students why this art has merit, especially if they got to experience it for themselves,” Glawson said. “Really it’s about letting go of trying to capture what something looks like.”

Glawson said the exercise was about social-emotional learning and teaching students to communicate their feelings in a different way.

The class talked about artist methods and ideas in abstract expressionist art such as the physicality of creating the work rather than trying to make a piece look like something.

“I really tried to get them to not plan and just empty their heads out, go with how they’re feeling, use the colors that represent their feelings,” Glawson said.

One element the class talked about was lines: zig-zagging lines are more chaotic and curved lines are more calm. She showed students a chart with emotional associations of colors and what different shapes represent as well.

“I think it’s almost easier for them to gap because they do not have all these restrictions and boundaries that they put on themselves,” Glawson said. “I think the great thing about kids is that  they can let go of tension and rules and stuff and really just embrace the activity.”

The kids were shown a video about the major players in the movement such as Jackson Pollock, Mark Rothko, Willem de Kooning and Pollock’s wife Lee Krasner.

“I always try to include women as well to show it’s not just a man’s sort of field,” Glawson said.

This is a new lesson and one Glawson said she wants to incorporate more so kids have an opportunity to play, explore and express themselves.

Eighth grader Virginia Walser enjoys painting. Abstract art is already something she does.

“It’s very relaxing is how I’d describe it,” Walser said.

She learned her classmates express themselves differently and that no two pieces in the class were alike. She saw one classmates cut and glue spirals to their pieces and another use glue as a visual element.

For Walser, she thought about what she wanted to do and started putting paint where she wanted it. She mixed paint with water for a different effect. She used red, blue, yellow, white and black.

“I would describe it almost as a splatter painting,” Walser said.

Walser said she likes to try all kinds of art, and she thought this lesson was good because she liked some of her classmate’s pieces even though they may not normally feel inclined toward art.

“One of them was able to create a very beautiful piece I was very surprised by,” Walser said, adding anyone can create art.