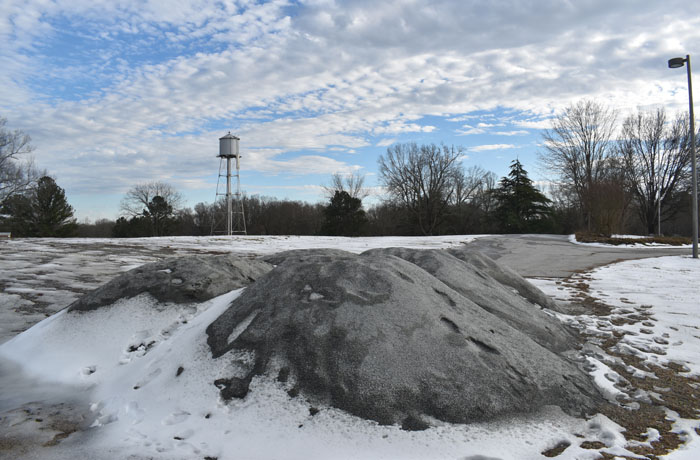 Mounds of rock and a carved out walking trail are the first signs of progress on Woodleaf Community Park. The park recently received more than $300,000 in funding from the state after not being selected for the funds in the fall. The money will allow organizers to move forward with the park's development as planned. Ben Stansell/Salisbury Post

WOODLEAF — After missing out on state funding for Woodleaf Community Park in the fall, Rowan County was expecting to delay the key phases of the park’s development while weighing its options.

Rowan County last week received notice that the $354,346 requested from the Parks and Recreation Trust Fund program would in fact be awarded. PARTF distributes matching grants to local governments for parks, public beach access and improvements in state parks. A nine-member citizen board called the Parks and Recreation Authority vets applicants and allocates funds each year.

Woodleaf Community Park was not one of the 14 projects awarded $5 million in funding when the Parks and Recreation Authority announced recipients in late September. However, the state budget enacted in November allocated an additional $101 million to PARTF to support state and local park projects, allowing the organization to administer an unexpected second round of grant funding.

“The new state budget’s increased funding for parks and recreation will make more recreational opportunities available across the state,” Reid Wilson, secretary of the N.C. Department of Natural and Cultural Resources, said in a news release. “As we’ve seen since the beginning of the pandemic, North Carolina families need more parks, trails, greenways, and facilities to get outside and active.”

With the recently awarded $354,346 from the state and the same amount of funding designated from Rowan County, Woodleaf Community Park’s organizers now have a little over $700,000 to jumpstart the project.

“This changed everything,” Rowan County Commissioners Vice Chair Jim Greene said. “As soon as the weather breaks, we expect to start breaking ground and get started on the project’s first and second phases.”

Rowan County Parks and Recreation Director Don Bringle said construction on the project will likely be underway in the next three to four weeks after the Board of Commissioners officially accept the funding.

Woodleaf Community Park is located on the former site of Woodleaf Elementary, which was closed in 2017 and demolished in 2019. The county plans to bring the park to life in three phases. The first phase calls for the implementation of a walking trail, playgrounds, signage and enhanced planting. The second phase features the installation of a parking lot and restroom.

Those two phases are likely to cost over $800,000. The funding from the PARTF grant will cover a majority of the first two phases, but the county will likely need to seek another source of funding for the third phase. The final phase calls for an amphitheater, large civic green, more parking lots, shelters, gardens and an outdoor exercise area.

In total, the park was expected to cost approximately $1.2 million, but that has likely increased due to the rising costs of materials. Availability of materials might also impact the park’s development timeline, Bringle said.

Bringle said the additional cost and potential construction delays will not prevent the county from building a park that people in the community will be happy to use.

When the county was not among the initial PARTF grant recipients, it still decided to move forward with the low-cost creation of a trail network on the property. Workers have carved out a large path and are using more than 200 tons of rock donated by Martin Marietta Materials to make it walkable. While progress has been made on the trail, Bringle said it is not open to the public yet.

Bringle encourages any Woodleaf residents with questions about the park to reach out to him directly at 704-216-7818 or by email at Don.Bringle@rowancountync.gov.