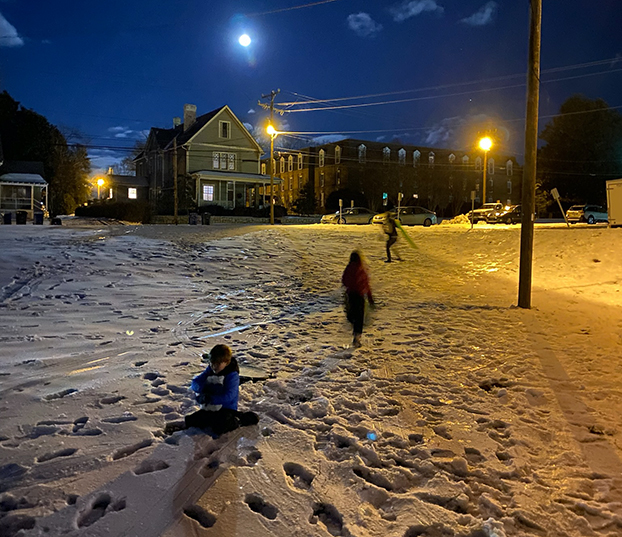 Graham Corriher submitted this photo of snowy activity downtown as Ruby (8) and John Graham (5) got to enjoy some rare winter fun outside.

Laurel to the persistence of snow days in an increasingly digital world.

Knowing they don’t have school, kids across Rowan County look out of their windows wide-eyed about the day ahead, excited to slip and slide down snow-covered hills or toss chunks of ice and snow at their neighborhood friends. Others are excited to spend the morning gaming, scrolling social media or bothering their siblings.

Knowing the same, there’s some relief for staff or educators who might otherwise be focused on delivering online learning. It could mean sleeping in late and enjoying a hot cup of coffee or tea while watching the snow fall or spending a little extra time making breakfast. Maybe it means spending the morning watching an episode or two of the hottest new TV show.

With iPads, laptops, smartphones and all manner of daily activities now possible online, it’s possible for snow days to go the way of the dinosaur. But schools shouldn’t ditch them entirely. Sunday’s snow storm was the first in two years. It’s good that Rowan-Salisbury Schools let schoolchildren enjoy it for an extra day.

Laurel to Rowan County commissioners for approving $27 million in tax incentives for what could be the largest job announcement in county history.

The tax incentives will work as a reimbursement, giving the unnamed company a break on taxes they would otherwise pay. It won’t reduce the amount of tax revenue county government receives from its current point. Over a 15-year period, the company will receive 80% of its paid taxes returned in exchange for creating 2,500 full-time and 2,600 seasonal part-time jobs as well as investing $584.3 million in a new e-commerce fulfillment facility.

Are the jobs worth passing up on revenue that’s roughly enough to build a new elementary school? Yes.

Incentives also are the name of the economic development game. If Rowan County does not provide an attractive incentive package, the company in question could simply choose another community that’s willing.

While the average wage, hasn’t been disclosed, Rowan Countians also can look at what other fulfillment centers pay to surmise most hourly wages will be somewhere in the teens. Those jobs will offer an opportunity for many Rowan Countians to receive a pay increase in addition to expanding the number of jobs available.

Laurel to a proposal to build a detox and mental health center in Rowan County.

Any analysis of recent trends will show the community is suffering from an epidemic of overdoses. Most Rowan County residents can attest that our collective mental health has taken a hit during the pandemic.

The center can provide much-needed treatment options that currently aren’t available or easily accessible. Jail or the emergency room are not the best places for people who need help with substance use or mental health issues.

The trouble, it seems, is that a proposed $15 million contribution could consume a major chunk of county government’s COVID-19 relief funding. Another factor, perhaps, is that the money would pay for a facility overseen by a health care service provider rather than a public entity that would face a higher level of scrutiny.

The committee planning for the center shouldn’t be deterred by an icy response from commissioners and county officials. The center could be important for Rowan County’s future.