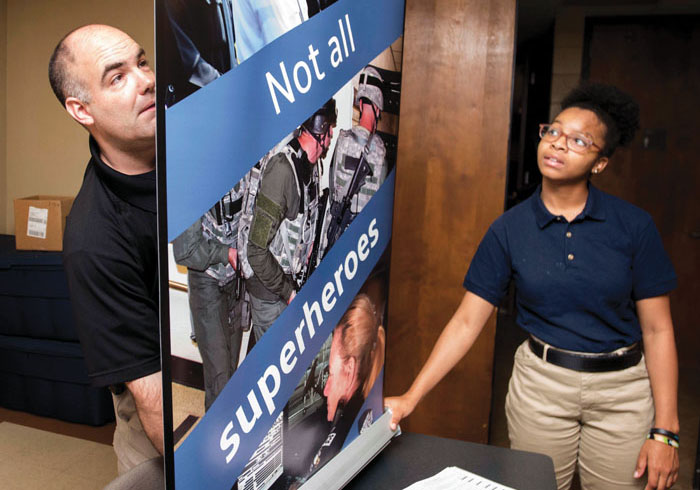 As of Jan. 13, the police department is 83% staffed, with 69 positions filled. Stokes said a conditional offer of employment has been made to a potential candidate who could begin later this month. The department is budgeted for 83 total positions. Of those, 64 are sworn and four are undergoing basic law enforcement training.

Stokes said he anticipates one officer will retire in 2022, two are actively looking at opportunities with other agencies and one is leaving for a one-year military deployment. Additionally, two recent candidates used a conditional offer from SPD to get better offers at other agencies.

Those numbers mirror the year prior, when Stokes detailed staffing woes to the council in February 2021. At that time, 88% of positions, or 73, were filled.

Turnover rate is calculated by dividing the number of separations by the number of available positions. Stokes reports 18 separations and 11 hires in 2021, which cost the department about $1.44 million. It costs $80,000 to replace a single officer, he added. In 2020, there were 12 separations and four hires, while 2019 broke even with nine hires and nine separations.

Stokes said those numbers show a perpetuating issue of SPD training officers only to have them take those skills elsewhere.

“You can see we train a lot of folks for other people,” Stokes said.

Stokes noted a budget message from the city manager in 2001, who referenced staffing woes even then. But at that time, there were 88 sworn positions. When asked by council member David Post Tuesday during the City Council meeting how confident the department is on filling its vacancies for 2022, Stokes said he was “cautiously optimistic,” adding that the council and new city manager when hired will have to put their heads together to tackle this issue that’s being seen across the nation.

Stokes added that he’s working on a few proposals for additional incentives in the department’s compensation package in addition to the findings from the ongoing citywide salary and benefits study.

“Everybody’s chasing the numbers, the pay and the incentive,” he said.

Council member Harry McLaughlin asked Stokes whether the burden of being short-staffed has led to the high turnover rate. Stokes said that’s a perpetuating issue, but there isn’t data to support that. But he’s heard anecdotally from officers that Salisbury is a hard place to police, with one candidate deciding to work elsewhere where he’d have fewer duties.

“There are some aversions to being involved in law enforcement now by young folks. We’re seeing the numbers in the community college that are entering into the criminal justice program be reduced significantly,” Stokes said. “There are a couple studies out there that say they don’t want to be subjected to the public ridicule and scrutiny, and quite frankly, are afraid that if they make a mistake, they’re the next victim of cancel culture. So that’s keeping people out.”

Stokes added that while he agrees it’s important to hire a police force that’s reflective of the broader community, hiring people of color can be especially challenging as many have indicated they don’t have an interest in working in law enforcement.

Stokes said he’s considered a number of measures to streamline the hiring process, including the elimination of one of the multiple interview panels and a reconsideration of what would previously have been automatic disqualifiers such as prior drug use and undetected crimes. Additionally, the department is beginning a statewide career fair to include a number of colleges and universities in the region, and the community relations officer’s duties have been scaled back to assist with recruitment. The department currently has a dedicated recruiting officer.

Stokes also said he’s had to scale back the minimum number of training hours. While the state requires 24, SPD required up to 150 hours and is now requiring closer to 100 hours.

Council member Anthony Smith asked what things would look like if Stokes cannot solve the staffing shortage. Stokes said the department would be forced to stop responding to certain calls, including when cars are broken into and larcenies at retail establishments, for example.