Wake Forest breaks through at Georgia Tech with 80-64 win 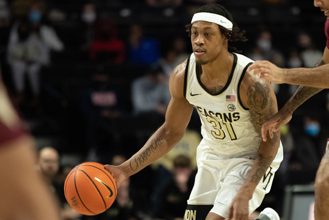 ATLANTA (AP) — Alondes Williams scored 12 of his 19 points in the second half when Wake Forest left Georgia Tech behind in an 80-64 victory Wednesday night.

The win snapped a four-game losing streak to the Yellow Jackets and also gave the Demon Deacons (15-4, 5-3 Atlantic Coast Conference) their first win at Georgia Tech in 15 games, dating to Feb. 22, 2004.

East Tennessee State transfer forward Damari Monsanto played his first game of the season for the Demon Deacons after suffering an Achilles injury last June that required surgery. He scored six points with a game-high eight rebounds in 12 minutes.

Georgia Tech outscored Wake Forest 18-12 to open the second half to take a short-lived lead. Monsanto then hit a 3-pointer to begin an 25-7 run that gave the Demon Deacons the largest lead of the game — 16 points — with four minutes to go.

Wake Forest led most of the first half but never by double digits, going in front 37-33 at the break.
Wake Forest head coach Steve Forbes missed the game because of an unspecified illness. Brooks Savage served as acting head coach.

Wake Forest is host to North Carolina on Saturday. Georgia Tech is home against Clayton State on Sunday, filling a conference bye on its schedule and replacing a postponed Dec. 21 game against Alabama A&M.