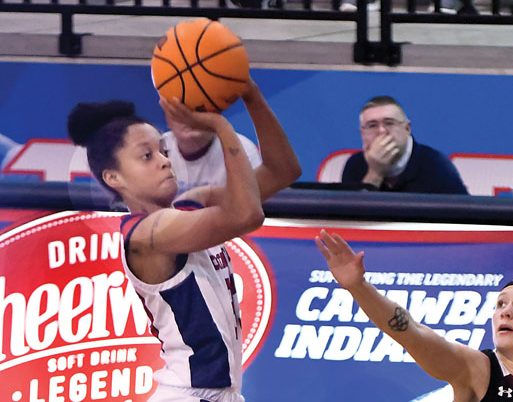 HARTSVILLE, S.C. — It was a struggle to get there, but at the end of Wednesday night Catawba’s women’s basketball owned another South Atlantic Conference victory.

The Indians got outrebounded, shot 36.1 percent and were credited with only four assists, but they were able to hold off the Coker Cobras 60-56 at the DeLoach Center.

Lyrik Thorne made a 3-pointer for a 58-47 lead with 3:55 left, so it should have been less stressful, but the Indians didn’t make a field goal the rest of the way.

Shemya Stanback got the last bucket of the second quarter to give Catawba a 31-30 halftime lead.

Thorne shot 5-for-7 and led Catawba with 15 points. Mercedes Wampler made a major impact off the bench with seven points on 3-for-3 shooting. She had four rebounds and two assists.

Catawba had a 20-15 edge in the turnover column. Most of that advantage was due to 13 steals.

Third-place Catawba (14-2, 11-2) stayed in the SAC race. Second-place Carson-Newman cruised in a non-conference game with Emory & Henry. Wingate got 14 points and seven rebounds from Salisbury grad Bryanna Troutman, the reigning SAC Player of the Week, and stayed undefeated in the league with an 83-42 romp against Lenoir-Rhyne.

Catawba’s men were postponed on Wednesday.

Catawba’s teams are scheduled to host Lincoln Memorial on Saturday.