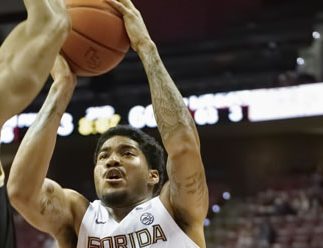 Florida State (11-5, 5-2 Atlantic Coast Conference) let a nine-point lead slip away in regulation and needed Evans’ driving layup high off the glass with 2 seconds left to send the game to overtime. The Seminoles held on for their first win over a ranked Duke team since Jan. 10, 2017.

Caleb Mills had 16 of his 18 points in the second half and overtime for Florida State, which won its fourth straight game. Butler scored 14 points, and Naheem McLeod had a season-best nine points and seven rebounds for the Seminoles.

Duke trailed 59-50 with 6:53 remaining, but a 3-pointer by Moore kicked off a furious rally by the Blue Devils, who went ahead 67-65 on Mark Williams’ dunk with 30 seconds to go. Banchero scored seven points during the closing stretch and assisted on two dunks by Williams, who finished with 15 points. Moore scored 13 points.

Duke: The Blue Devils had 15 turnovers, were outrebounded 43-37 and were hindered by the loss of guard Trevor Keels to injury.

Florida State: The Seminoles had nine steals as they picked up their 14th win over a ranked opponent in the last four seasons.