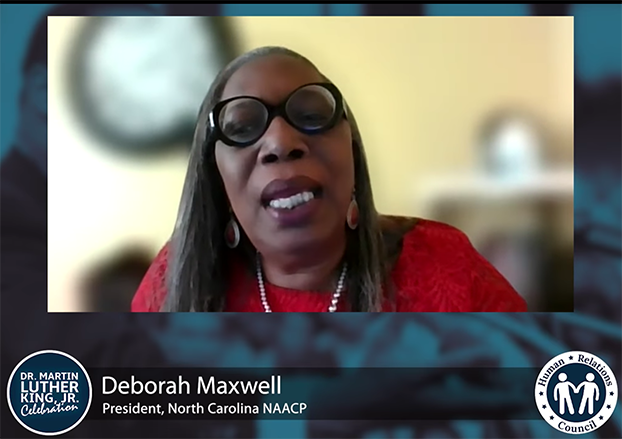 King, a civil rights icon, wanted all children to have the same educational opportunities, fair housing as well as equity in employment and voting, Maxwell said.

“As I speak, the John Lewis Voting Rights Act and the Freedom to Vote Act have not been passed. So in the words of Dr. King, we have to keep moving,” Maxwell said Monday during the Salisbury-Rowan Human Relations Council’s Martin Luther King, Jr. Celebration. “We move to register voters safely. We move to educate the general public, with the end result of moving them to the polls and casting that basic right known as the vote. We move by contacting our legislators and demanding that they do the right thing and approve the passage of this bill.”

The event also featured the National Anthem sung by Zaylon Simmon and “Life Every Voice and Sing” by Destiny DeBerry Stone-King.

The bill named for the late John Lewis, a Georgia congressman and voting rights activist, passed the U.S. House in August, but it hasn’t passed the U.S. Senate. Among its provisions are requirements for states to receive preclearance for voting procedure changes if they have a certain number of voting rights violations. The bill also could make it easier for plaintiffs to prove race-based limits on voting rights. The Freedom to Vote Act is larger and more expansive in scope.

Maxwell said Congress moved quickly to make Juneteenth a federal holiday and to pass a hate crime bill in May 2021.

“But still, no voting rights act,” she said. “We have to keep moving forward, pushing the proverbial envelope to get what we deserve, a fair voting process. … We move for justice. We move for freedom. We move for the vote.”

She encouraged people to call Sens. Richard Burr and Thom Tillis, Republicans who represent North Carolina, and tell them to support the bill named for Lewis.

She said true peace won’t come to America until charges are equal for the same crimes, when there are more nurses, social workers, counselors and psychologists in schools than law enforcement officers, when gentrification stops because cities elevate funding for Black neighborhoods and when people stop feeling they’re superior to others because of their melanin composition.

“They forgot that everyone has melanin, just varying degrees,” Maxwell said.

She also encouraged people and organizations to focus on creating and advocating for equity rather than equality.

“For so many years, we demanded our equal rights. We were loud and bold as we demanded and thought we were receiving them,” she said. “Lo, we are realizing we wanted equity, not equality. Give us a school that is not the same in terms of staff and infrastructure. That is equality.

“We as a people fell for that in terms of our public and neighborhood schools. Now, give us a school with the same caliber of staff and infrastructure. That is equity.”

Following Maxwell, Councilman Smith, the liaison to the Human Relations Council, called Monday’s event timely for Salisbury’s moment. Smith cited a quote from a speech King made in 1963 at Western Michigan University. People have become well-adjusted to injustice and inequality in America, Smith said, encouraging people to be creatively maladjusted.

In the 1963 speech, King used made a series of comparisons to define maladjusted: “As maladjusted as Abraham Lincoln who had the vision to see that this nation would not survive half‐slave and half‐free. As maladjusted as Thomas Jefferson who in the midst of an age amazingly adjusted to slavery would scratch across the pages of history words lifted to cosmic proportions, ‘We know these truths to be self‐evident, that all men are created equal, that they are endowed by their creator certain unalienable rights’ that among these are ‘life, liberty, and the pursuit of happiness.’ As maladjusted as Jesus of Nazareth who could say to the men and women of his day, ‘Love your enemies, bless them that curse you. Pray for them that despitefully use you.’

In Salisbury, Smith said creatively maladjusted means people who continuously and effortlessly work to make the city more just, diverse and equitable. It means people are curious and have “an insatiable hunger to dive deep into the root causes of the challenges that we have so that we can come forward and bring transformative and impactful solutions that make this city a beloved community.”