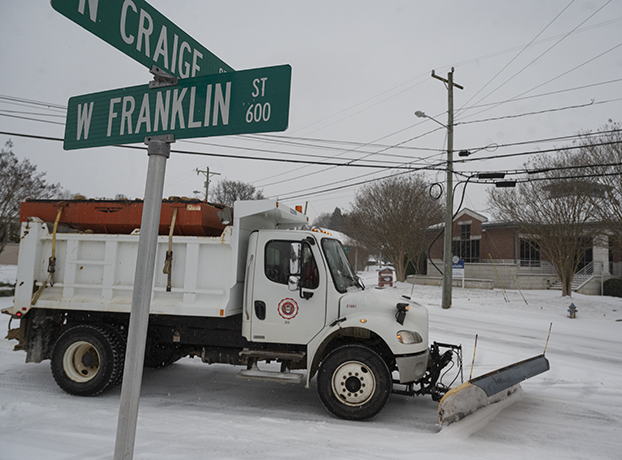 Rowan County Emergency Services Chief Allen Cress on Monday night said he only knew of one cluster of outages that had since been resolved. There were no major crashes and about 100 fewer calls handled by Rowan County 911 than a typical Sunday, Cress said.

Projections for up to a half-inch of freezing rain raised concerns about power outages, but the worst clusters in North Carolina primarily were east of Rowan County. Moore County appeared to be one of the hardest-hit, with 7,000 people still without power Monday night, according to Duke Energy’s outage map.

“We were fortunate that the precipitation that fell did not stick to the trees and power lines,” said Emergency Management Division Chief T.J. Brown.

Snow and sleet comprised nearly all of the winter precipitation in Salisbury and Rowan County, with the National Weather Service’s preliminary estimates saying 3 inches fell in the Salisbury area, between 1 and 2 inches in the southeastern tip of the county and between 3 and 4 inches in western and northern pockets of the county.

While some of the most highly traveled roads were clear of snow or sleet Monday afternoon, others in rural parts of the county and neighborhoods were still thawing out. Lingering, treacherous roads conditions combined with temperatures dipping into the teens Monday night led Rowan-Salisbury Schools and others to call off classes Tuesday.

Rowan-Salisbury Schools also canceled all after-school activities and a Board of Education meeting.

Salisbury Academy and Sacred Heart both said they hoped to return to in-person classes on Wednesday.

Rowan-Cabarrus Community College said it would open at noon on Tuesday, but all courses are meeting virtually through Feb. 7. The school said continuing education courses scheduled before noon would be canceled.

Rufty-Holmes Senior Center as well as its lunch sites will be closed to participants on Tuesday because of expected road conditions, too. Staff will be available to answer phones at 704-216-7714.

The city of Salisbury’s Customer Service Center, which handles bill payments, won’t be open until 10 a.m.  Rowan County government offices also are on a two-hour delay.

Meals on Wheels said it wouldn’t deliver on Tuesday because of expected road conditions and supply chain issues.

In the city of Salisbury and Kannapolis, garbage and recycling pickup will be delayed by one day. Leaf and limb collection will be delayed multiple days in Salisbury. Landis said its trash service would resume Tuesday, but it could be longer depending on road conditions. Utility disconnections for nonpayment in Landis also have been delayed until Jan. 19.

To help with the cold temperatures, Rowan Helping Ministries opened a warming station for the homeless on Sunday and Monday nights. Director Kyna Grubb said people stayed in the dining room of Jeannie’s Kitchen. There were scarves, gloves and blankets that people could take with them when they left. Helping to make the warming shelter possible were the Rowan County Health Department; S&H Youth and Adult Services; First Baptist, First Presbyterian and Cross Life churches; and Rowan County EMS.

Grubb said Sgt. Daniel Lancaster of the Salisbury Police Department was a hero for salting walkways, shoveling snow and transporting staff members to the shelter on Sunday during the storm.

Cress encouraged people to be careful driving if it’s necessary Tuesday morning because of the likelihood that melted precipitation will refreeze. Wednesday morning’s commute could feature some slick spots, too, especially where the sun doesn’t shine, Cress said.

Depending on how fast it melts, leftovers from Sunday’s storm could be around for a second round of winter precipitation Thursday and Friday — when the National Weather Service says there’s a 40% change of snow.