Salisbury, Rowan County wake up to snow as winter storm moves through 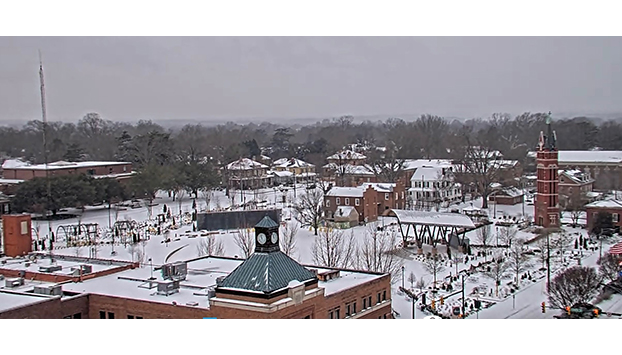 Salisbury and Rowan County are waking up to snow on the ground and a mix of winter precipitation on the way as a winter storm continues to move through the region.

Before dawn, a winter storm started with snow across the county. Warmer air above the ground has changed the precipitation to sleet even as temperatures near the ground are below freezing. Traffic cameras on Interstate 85 showed some snow-covered lanes from the Yadkin River to Kannapolis. Snow coated Salisbury’s newest park, Bell Tower Green, too. 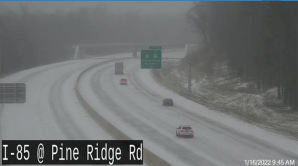 Interstate 85 at Pine Ridge Road at 9:45 a.m. on Sunday. This photo is from traffic cameras operated by N.C. DOT. Click on the image for a larger view.

Snow changed to sleet around mid-morning, which will create icy conditions in the afternoon, said Steve Monday of Rowan County Weather. Weather forecasters and Rowan County Emergency Services personnel advise people to stay home unless necessary and be careful when venturing out. Sustained winds and gusts on top of wet conditions could result in a significant amount of tree and utility damage, Emergency Management Division Chief T.J. Brown said in a winter weather condition update. Power outages are expected.

The roads are covered in snow. As most of the county has transitioned to a mix, roads will become even slicker. Please don’t travel unless absolutely necessary. pic.twitter.com/SAK496TZJM

While totals have varied, National Weather Service estimates now project the Salisbury area will end with between 1 and 2 inches of snow and sleet as well as two-tenths to four-tenths of an inch of ice. Little or no additional snow accumulation is expected besides what the area has already received. Wind gusts today could be in the mid-30s, the National Weather Service says. The area remains under a winter storm warning until midnight.

The low today is projected to be 27, which will keep winter precipitation on the ground until temperatures rise above freezing on Monday.

Send photos of conditions where you are to news@salisburypost.com. Tell us the rough area where the photo was taken, including a city or town name, as well as names of any people pictures in the photos. We’ll publish as many photos as possible in the print edition of the Salisbury Post.