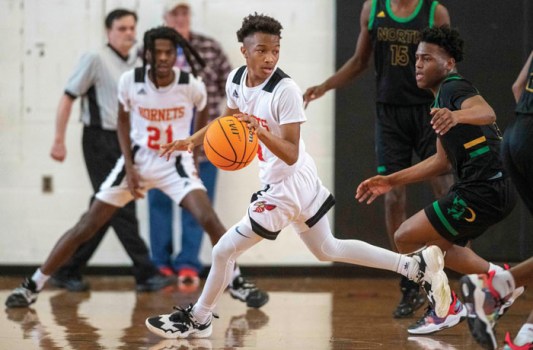 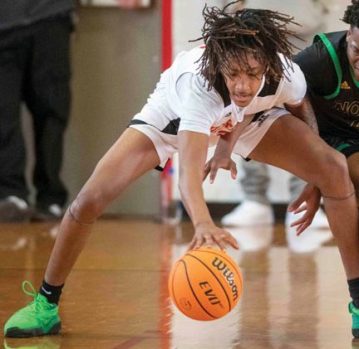 Jayden ‘Juke’ Harris is rated as a four-star recruit (out of five) and he’s considered a top 40 player nationally, so he’ll make things interesting for the Hornets this year. File photo by JON C LAKEY / FOR THE SALISBURY POST. 1/15/22, Salisbury,NC. 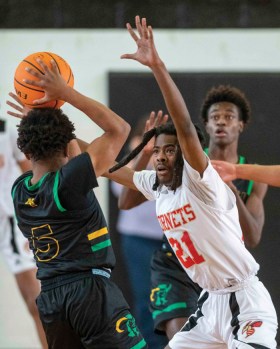 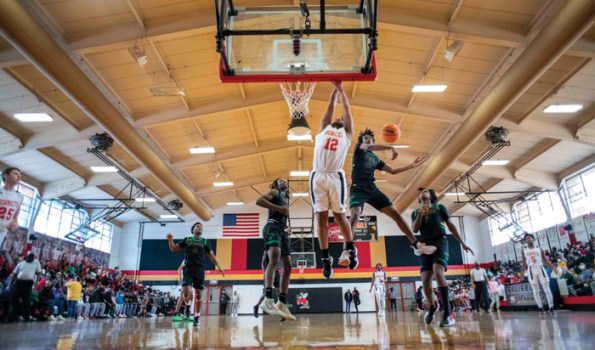 SALISBURY — The rest of the CCC can hear Salisbury’s boys basketball team knocking on the door — but no one wants to answer it.

Visiting North Rowan got an earful Saturday afternoon, when the Hornets used a convincing 75-50 victory to ascend into first place in the congested conference standings.

“I knew it was just a matter of time before we started playing well,” winning coach Bryan Withers said, moments after Salisbury (9-3, 4-0 CCC) earned its seventh straight win and moved half-a-game up on idle Thomasville (3-0 CCC). “Now we get to practice a bit. I’m still not passionate about everything we’re doing, but I want us to be more unselfish. I want us to lock in on defense and help each other out.”

Salisbury did enough to sidestep third-place North (11-2, 4-2), winner of its previous six games. Losing coach Jason Causby felt and sounded like six of the seven dwarfs — everyone but Happy — after the Cavs were outplayed at both ends of the floor.

“There wasn’t a lot to like, as far as what we did today,” he said after North reached the midpoint of its league season. “Salisbury did a good job disrupting everything we were trying to do. Bottom line, we’ve got to be able to put the ball in the hole. We missed a lot of shots that we customarily make, and if you can’t score, you can’t win.”

Playing a swarming, tight-fisted defense, SHS limited North to five field goals in the decisive first half. The Hornets built a four-point lead in the first quarter and stretched it to 33-14 by halftime.

Salisbury was paced by Juke Harris, its ever-improving sophomore. The 6-foot-4 shooting guard filled the boxscore with 27 points and 11 rebounds, both game-highs. He did most of his damage in the final period when he netted 17 points by converting a handful of straight-line drives to the basket and four of six free throws.

“We’re starting to believe in ourselves,” Harris said. “If we trust each other, we can probably beat anybody in any division. We’re that good.”

That may sound more radical than Dylan going electric, but it holds some weight. In the recent Christmas tournament at Catawba’s Goodman Gym, Davie County coach Bruce Wallace graded the Hornets as a 2A state championship contender.

“The Davie coach did something that a lot of people don’t,” Withers noted. “He gave my kids the credit they deserve about the way they play. That’s made all of us feel a little better. Ever since then, we’re playing great ball.”

Carpenter, who drained four 3-pointers and led North with 17 points, provided too little, too late. He scored 10 points in the third quarter, but the Cavs failed to make a dent in their deficit and trailed 48-28 after three. Salisbury took its biggest lead, 61-31, when Harris sank a free throw with 5:21 remaining.

“We were able to bring the whole team together,” teammate Cam Stout said after contributing 18 points and seven rebounds. “Guys who have been struggling helped us in many ways. We had good communication throughout. If someone got beat on a play, we were all there, telling him to keep his head up and make the next play.”

Defensively, Salisbury held North to 15 baskets. “You can’t win most games that way,” Causby lamented afterward. “And you sure can’t beat a good team.”

Much less a team that finds itself sitting in the conference birdseat. The Hornets face an important mid-season challenge next Friday when they visit Thomasville.

“We’ll be ready,” Withers said with a reassuring smile. “My guys are really reacting well to big games. They just keep grinding.”

NOTES: Sophomore Deuce Walker had five assists for the Hornets. Teammate Mike Geter had eight points — all in the first half — and made four steals. … North’s Darrell Carpenter (8) and Naejone Whitney (6) combined for 14 rebounds. … The Cavs return to action with a non-conference game at West Rowan on Wednesday. … A pre-game moment of silence was observed for Tony Hillian, the Salisbury grad and former North Rowan girls basketball coach. He passed away unexpectedly Friday at age 47.