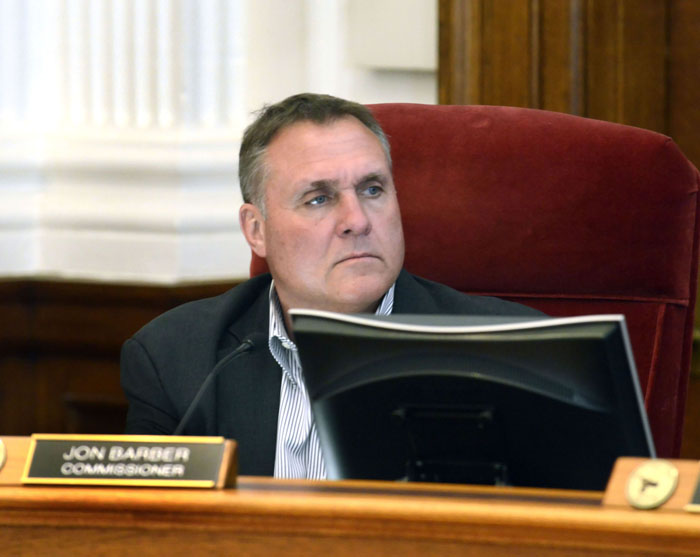 Jon Barber, who died on Aug. 11, 2017, is shown at a Rowan County commissioners meeting in 2014. Salisbury Post file photo

SALISBURY — Four years after the death of William “Jon” Sherrill Barber III, a judge ruled late last year land once owned by the former county commissioner was sold “without authority” by the executor of his estate and is in fact the property of his father.

Jon Barber, who served on the Rowan County Board of Commissioners from 2006 to 2014, was deeded approximately 103 acres of land on Graham Road near Bear Poplar in 1994. He intended to sell about 44 acres of the land to Bear Poplar Farms, a company registered to Joel Olsen.

Olsen is the CEO of O2 emc, a solar farm developer based in Cornelius. O2 emc had plans to construct a five megawatt solar energy system on the site. The request for the system was approved by the Rowan County Board of Commissioners in September 2016.

All 103 acres of the land were eventually sold to Bear Poplar Farms in 2018, a year after Jon Barber died. Believing the transaction to be erroneous, brother James “JD” Dale Barber filed a lawsuit in May 2019 on behalf of their father, William Sherrill Barber Jr., against defendants Bear Poplar Farms, Pamela Dixon and Leigh Taylor Casper.

Casper is the adult daughter of Jon Barber’s ex-wife, Pamela Dixon, and was listed as the personal representative and executor of the estate of Jon Barber.

Following Jon Barber’s death, Casper in October 2017 filed a petition against JD Barber and William Sherrill Barber Jr. to pay outstanding debts against Jon Barber’s estate. Jon Barber owed a debt of approximately $96,800 to First Bank at the time of this death, according to court documents.

A year after the petition’s filing, Casper sold the 103 acres to Bear Poplar for $552,000. The May 2019 lawsuit filed by JD Barber stated he believed Casper obtained an “improper” $34,900.02 commission from the sale and that she sold the land under value. The fair market value of the land currently listed on the Rowan County tax map is $716,588.

In a judgment issued in Rowan County Superior Court in November, Judge Richard Gottlieb ruled the sole heir of the land when Jon Barber died under the “intestacy laws” of North Carolina was his father, William Sherrill Barber Jr. Therefore, the property was his in August 2017 following the death of his son.

The ruling further stated Casper improperly sold the land because she did not first obtain a court order authorizing the sale as required by North Carolina statute. The authorization was required even though Casper was selling the property to pay off debt.

As a result, Gottlieb ruled the Bear Poplar deed to be “invalid, null and void.” The judgment states that Bear Poplar’s “heirs, successors and assigns have no right, title, estate, lien or interest in the 103 acres.” Therefore, William Sherrill Barber Jr. is the “sole owner and holder of a fee simple interest” in the property.

An objection to the ruling has been filed by the defendant, but a hearing on that objection has not been scheduled. As a result, the case is still pending.