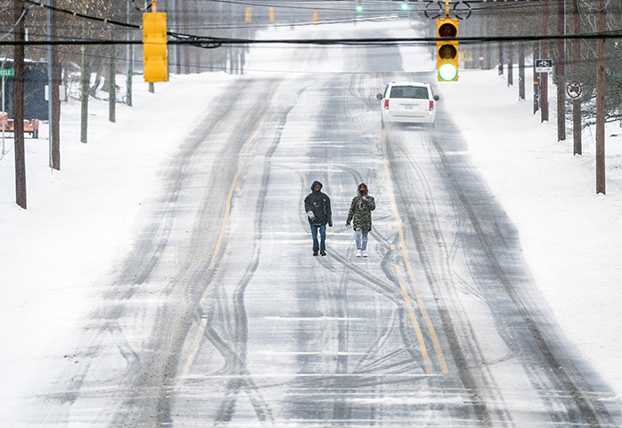 SALISBURY — As the winter storm that brought multiple inches of snow and sleet to Rowan County this weekend moves northeast, forecasters and emergency services personnel are cautioning against driving on icy roads in the next couple days.

Starting in Sunday’s early hours, a winter storm moved through the county, delivering a mix of snow and sleet. Steve Monday of Rowan County Weather said the forecasted amount of snow and sleet was 1 to 3 inches, with less snow and sleet near the Gold Hill area and progressively more in locations north and west. While the forecasted totals are expected to be accurate, official numbers haven’t been finalized.

The area’s winter storm advisory, which includes Rowan County, was extended from midnight Sunday to 8 a.m. on Monday because winds are expected to pick up through the night.

“One last quick burst of snow” Sunday evening was possible as the storm pushed northeast, Monday said. He said locals should expect icy conditions on the roads Monday morning. Additionally, the forecast poses the potential for a refreeze of any melted precipitation Monday night because of lower temperatures. So, the community should prepare for dangerous road conditions and power outages, he added.

Brown urged people to be as safe as possible when traveling and for them to expect roads to be slick. He suggested drivers take extra time and increase their following distance to avoid accidents.

Jake Wimberley, a forecaster with the National Weather Service’s Greenville/Spartanburg office, on Sunday night said “accumulating precipitation” was mostly over, with some light snowfall or “snow flurries” expected. Monday was expected to be mostly sunny, with “breezy and cold” temperatures remaining, Wimberley added.

The forecast looks dry for Tuesday into Wednesday, but another cold front is expected to move through Wednesday with possible winter precipitation.

“Keep an eye on the forecast for the next few days to see how that evolves,” Wimberley said.

Lingering winter precipitation on the ground will affect some operations on Monday. Salisbury officials announced on Sunday the city’s transit services will be canceled Monday, including both the fixed route and ADA Paratransit route. Garbage pick-up will be delayed until noon or by a full day depending on road conditions. Limb and leaf collection will resume on Tuesday.

Additionally, the city urges motorists to avoid Harris Street between Martin Luther King Jr. Avenue South and Hillsboro Street due to a waterline break. The waterline is tentatively scheduled to be repaired Tuesday, and no homes were affected.

Salisbury-Rowan Utilities’ administrative offices will be closed on Monday. Residents with water or sewer emergencies should call 704-638-5339.

The town of Landis has also suspended its garbage collection services for Monday.

Parks across the county will be closed Monday due to the weather and road conditions, including Dan Nicholas Park, Ellis Park, Dunns Mountain Park, Sloan Park and Eagle Point Nature Reserve.

The city of Kannapolis is also suspending its garbage collection and recycling service Monday, with collection on a one-day delay for the week. The city’s parks, greenways and Rider Transit will also be closed Monday.