Storm expected to bring outages, icy road conditions that could last until Monday 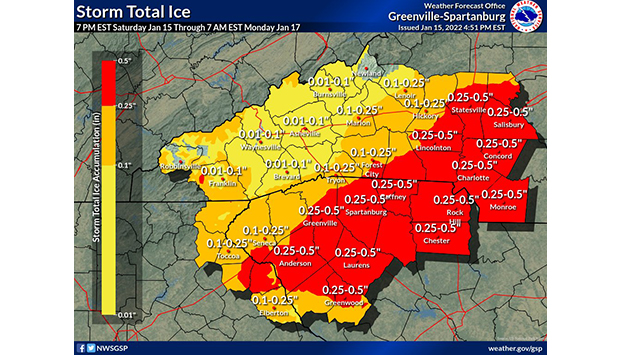 The National Weather Service's freezing rain and ice projection for the area covered by the Greenville-Spartanburg office.

SALISBURY — Winter weather on Sunday is expected to bring power outages and icy road conditions that could last into Monday.

National Weather Service forecasts project less than a half inch of snow in the initial hours of the winter storm early Sunday. Then, forecasts project a mix of snow, sleet and freezing rain throughout the day. Forecasts posted Saturday evening projected a total of one-quarter to one-half inch of ice in Rowan County and less than one inch of snow and sleet. Maximum wind gusts could reach 26 mph in Salisbury, the National Weather Service said.

Rowan County is among a number of counties in the region under a winter storm warning.

The National Weather Service and Gov. Roy Cooper on Saturday encouraged people to finalize plans to keep warm and safe in case of long-term power outages.

“Regardless of where you live, pay close attention to your local weather forecasts to get prepared and know whether it’s too dangerous to go out,” Cooper said during a Saturday news conference. “Plan to stay home.”

Duke Energy has brought in hundreds of people from other service areas, including the Midwest and Florida, to help with expected power outages. About 1,000 workers from other utility companies were expected to arrive in the Carolinas on Saturday, too.

“Across the Carolinas, we have power line and tree crews, and other storm personnel, ready to safely respond to power outages this weekend,” said Jason Hollifield, Duke Energy Carolinas storm director.

In a message to customers Saturday, Duke Energy said, “While we will face any storm damage with the full force of all available resources, the likelihood of widespread damage and difficult travel conditions could make this a long, complicated restoration process. Sunday’s precipitation may prevent us from making significant progress until the storm clears the area later that evening.”

“The storm will have significant impacts on our area,” Brown said Saturday.

Cress encouraged people to pile on blankets if power goes out, shelter in place and only call 911 for a true emergency. People should not bring barbecue grills or other sources of open fire into their house if the power goes out. People who use a gas heater should make sure they have a carbon monoxide monitor, Cress said.

Emergency Services officials made plans to use the J.F. Hurley YMCA in Salisbury as a shelter in case of extended, widespread power outages. Brown said Emergency Services crews would work with the American Red Cross to determine when to open the shelter.

The city has 12 plows for its trucks as well as five salt and sand spreaders. After a couple years without a winter storm, Powers said public works staff checked equipment to make sure it was in working condition Thursday in case repairs were needed Friday.

In Landis, which has its own power system, Town Manager Dianne Seaford said the top priority of employees will be restoring electricity. Street maintenance will come second.

“If trees are down, our street crews will be working to clear the debris and provide passage for electrical crews,” Seaford said in a letter posted online. “Please be patient! We have limited equipment to clear local streets.”

• Keeping phones and devices charged in advance of a power outages.

• Using generators outside only.

• Make sure space heaters have 3 feet of clearance from all flammable objects. Turn them off when going to bed and/or leaving home.

• Remember to open your chimney’s flue when using it. Only use dry, seasoned wood.

• Stay away from power lines that have fallen or are sagging. Consider all lines energized, as well as trees or limbs in contact with lines. Report downed power lines to Duke Energy or local emergency services.