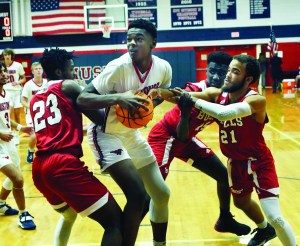 East’s Teyachta “Tee” Harris draws a crowd of defenders in an earlier game. Photo by Wayne Hinshaw; for the Salisbury Post.

GRANITE QUARRY — East Rowan’s 85-64 win against South Rowan on Friday was notable as the Mustangs’ first South Piedmont Conference victory of the season and for relative offensive explosions by both teams.

Both teams filled it up at a much higher rate than normal.

East led 24-13 after a quarter and by 45-31 at halftime. South outscored the Mustangs in the third quarter, but East finished strong with a 26-point fourth quarter.

“We executed very well on offense and defense and played with a lot of intensity,” East Rowan head coach Andrew Porter said. “We played as a team and had balanced scoring. I was proud of the effort.”

It was East’s most prolific offensive night since the Mustangs racked up 94 against North Iredell during the 2008-09 season. East had scored 40 in its previous game against powerhouse Central Cabarrus, but the Vikings have done that to a lot of people.

At 6-foot-6, Tee Harris had a height advantage inside for East and delivered a huge game with 20 points and 12 rebounds. Daniel Overcash had one of his best nights with 12 points and six rebounds.

South moved the scoreboard frequently thanks to humongous games by Jacob Ritchie, who scored 25, and Aaron Jones, who had 18.

Elijah Anderson added nine for South, which hadn’t scored more than 40 in a game since November. The Raiders went through some roster reshuffling and lost some talented players in December. There have been tough times, but Friday was encouraging.

“We played much better than we have in a while,” South head coach Daniel Blevins said. “We handled their press well and played hard. I was proud of the composure and character that we showed.”