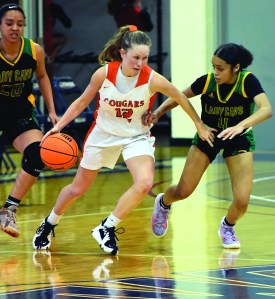 Carson’s Camden Corley vs. North Rowan in the Christmas tournament. Photo by Wayne Hinshaw, for the Salisbury Post.

CONCORD — Friday’s final score was 51-29, but even that was deceiving.

Carson’s girls basketball team absolutely romped at Central Cabarrus.  The Cougars led the South Piedmont Conference contest 31-6 at halftime and reached the running-clock magic number of a 42-point lead in the third quarter.

Carson (11-3, 4-1) was able to play three jayvees extensively and for all of the fourth quarter.

Mary Spry scored nine points in the third quarter and finished with 15. She had seven rebounds and five steals.

The senior boosted her career points total to 984.

Camden Corley shot 7-for-11 and scored 14 points. She scored eight in the second quarter as the Cougars pulled away.

Brooklyn McBride scored her first varsity points of the season.

SPC contenders Northwest Cabarrus, West Rowan and Lake Norman Charter were unable to play on Friday, so Carson gained on everyone.