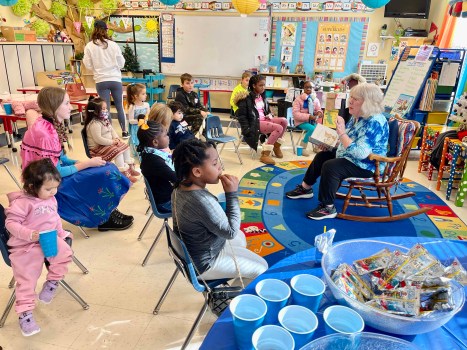 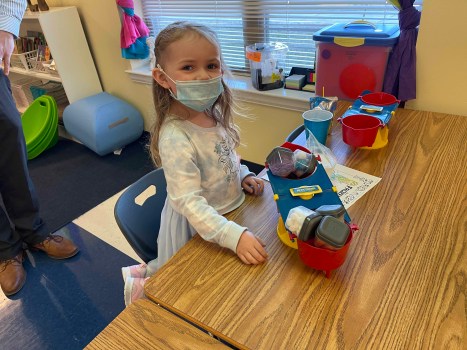 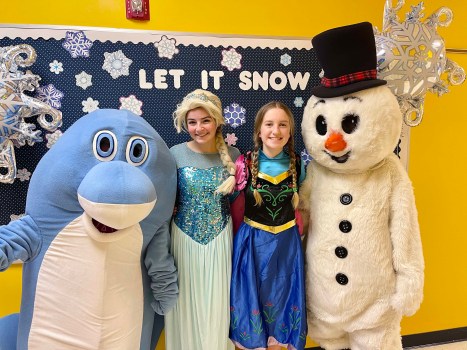 The event was themed around Fin, the school’s mascot, Frosty the snowman and “Frozen,” the hit children’s Disney franchise. It brought out kids in the 4-8 age range for science, technology, engineering and math exercises mixed with some fun. The school made snow, took measurements of objects such as marshmallows painted with icicles and had time for stories.

The event was open to all kids in the age range, whether they attend Sacred Heart or not, and attracted a mix of current and prospective students.

Junior kindergarten teacher Cate Fernandez said students poured and measured to make the snow, then painted ice cubes to use for watercolor painting. The kids rolled dice to practice addition and participated in weighing activities with snowman-inspired objects such as carrots and buttons.

“They would put them on a scale and they would balance to figure out which ones were heavier or lighter,” Fernandez said.

Fernandez said she thinks about the objective and how to get there with manipulatives when thinking about fun lessons for young kids. She said it is a creative process and credited the other lower elementary teachers for their ideas as well as discussions between faculty members.

The art activities were focused on the process rather than the final result.

“It’s not about the finished product. It’s how you do it,” Fernandez said,

The event was first held in early 2020, before the pandemic, but the school did not hold it in 2021 because of COVID-19. Fernandez was not on staff for the original event, but she attended with her own daughters.

“Since I had experience on the other side of it, I thought about all the great things we did the last time and how much fun my children had,” Fernandez said. “I just wanted to make sure that students this year had as much fun and it was as meaningful for them, too.”

Fernandez said adding purposeful play draws kids in and makes them want to continue, noting the kids just think they are playing and do not realize they are taking in lessons at the same time.

“Especially in junior kindergarten I think that’s important,” Fernandez said. “Because you want them to love school and for a lot of them this is their first experience in school. You want to make sure it’s a good experience and they want to be lifelong learners.”

Fernandez said the event also was a good chance to check on the growth of former students and answer questions from prospective families in a relaxed setting.

This is a big month for Sacred Heart. Marketing Director Robin Fisher said the school will celebrate Catholic Schools Week in January. It is also marking its 140th anniversary with a lineup of events.