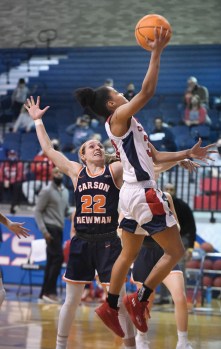 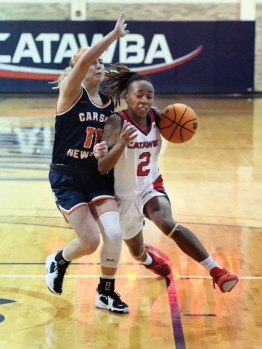 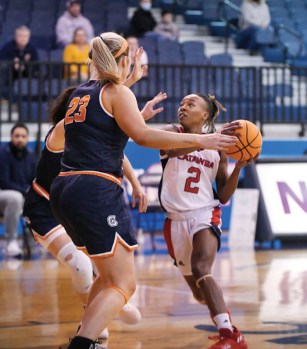 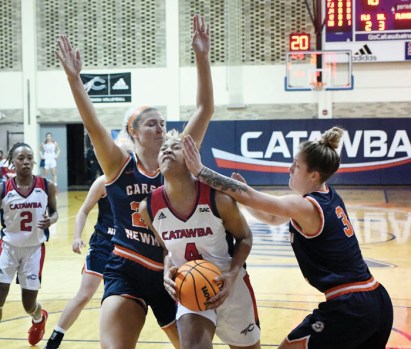 Lauren Ford gets a hand to the face as Carson-Newman’s Addison Byrd tries to keep her from scoring as Lindsey Taylor defends from behind. photo by Wayne Hinshaw; for the Salisbury Post 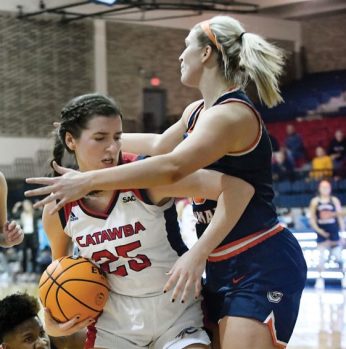 Catawba's Sara McIntosh led the Indians with 15 points on Wednesday. File photo by Wayne Hinshaw; for the Salisbury Post

SALISBURY — It was a classic matchup.

Catawba’s women’s basketball team forces the most turnovers in the South Atlantic Conference, and the Indians boast the league’s second-best defensive numbers.

Carson-Newman countered with, by far, the SAC’s most efficient offensive team.

They finally crashed into each other on Wednesday at Goodman Gym. It went overtime, with Carson-Newman pulling it out, 83-78.

Catawba fought and did a lot of things right, but just couldn’t score at crunch time. Catawba shot 3-for-12 in a frustrating fourth quarter.

In the overtime session, it got worse. The Indians were 0-for-5 from the floor and 2-for-6 at the foul line. Two points in five minutes. That wasn’t going to get it done against Carson-Newman.

The Eagles, who average 82.7 points per game, managed to get to their average against the scratching, clawing Indians. They outscored the Indians 40-24 in the paint. The second-place visitors improved to 12-3 and 10-2. Catawba, undefeated before losing at Anderson last week, is 12-2 and 9-2 and occupies third place.

Carson-Newman won despite Catawba doing a stellar defensive job against guard Braelyn Wykle, the SAC’s leading scorer. Wykle scored 14 points, but shot 4-for-16. She did make all six of her free throws.

Despite the disappointment of a huge home loss, the Indians are still very much in the race. They’ll visit Jefferson City on Feb. 12.

Catawba still has two February games to play against Wingate (13-1, 11-0), the league leader. Wingate beat Coker 69-58 on Wednesday, with Salisbury High grad Bryanna Troutman, who is having an amazing junior season, scoring 31 points.

Even with Sara McIntosh shooting 5-or-6 inside, Catawba sank to 38.2-percent shooting for the game with its struggles down the stretch.

Carson-Newman shot 45.9 percent, similar numbers to what the Eagles normally shoot. The Eagles took only nine 3s. They were 23-for-29 on free throws, and at one point, they were 15-for-16.

Carson-Newman led by as many as eight points in the second quarter and took a 45-40 lead to halftime.

Catawba made a charge as the third quarter began. There were eight ties and 10 lead changes in the second half.

Catawba went up by five and had the momentum, but the shots stopped falling.

With Catawba leading 76-74 at the end of regulation, Carson-Newman had a final frantic possession that included point-blank misses. A foul was whistled on the Indians with less than a second left. Campbell Penland calmly made two free throws for the visitors to send the game to overtime.

Carson-Newman won for the fifth straight time at Goodman Gym.

Lindsey Taylor scored 21 for the Eagles. Harli Smith shot 6-for-6 and scored 15.